Pittsburgh hurler Enrique Romo actually looks like a pirate on his 6th and final Topps card.  All he needs is an eye patch. I wonder what that is in the background? 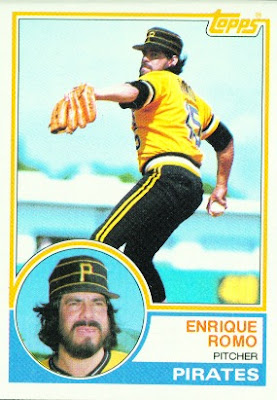 Player:  The Seattle Mariners first year in the majors was 1977 and like all expansion franchises, they really needed pitching.  So they dug deep and purchased the contract of Enrique Romo from the Mexico City Reds where he had won 20 games with a sparkling 1.89 ERA in '76.  He was the #2 starter as the Mariners set sail to their maiden season but after three starts, an injury sidelined him for three weeks.  Upon his return he assumed duties as the ace reliever and saved 16 games with a 2.83 ERA in 114 innings.
Romo continued with the Mariners and resumed his bullpen role in '78.  He again led the team in saves (10) and logged 107 innings with a 3.69 ERA.  After the season he was peddled to the Pirates in a six-player deal.
Romo was part of a fine bullpen in Pittsburgh as he and Grant Jackson set up for Kent Tekulve.  Romo appeared in 84 games, won ten, and saved five others.  He pitched 129 innings with a 2.99 ERA to help the Pirates to the postseason.  Once there, he pitched in two games in both the NLCS and World Series as the Bucs brought home the championship.
He put up more workman like numbers in 1980 with 123 innings, a 3.27 ERA, and 11 saves.  He was rather mediocre the next two years as his walks and gopher balls increased and he posted ERAs of 4.54 and 4.36.
Although Romo had been a moody presence and hadn't pitched well in recent years, the Pirates were surprised when he was a no show in 1983.  Romo stayed home in Mexico where some said he was discontent over a fine manager Chuck Tanner levied during the '82 season and others rumored that there was a threat on his life if he returned to the states.  Romo never pitched in the majors again and "retired" with a 3.45 ERA, 55 saves and a championship ring.
Stuff:  A live fastball, and like many Mexican pitchers Romo threw a wide assortment of pitches including a screwball, palmball, and probably a spitter. 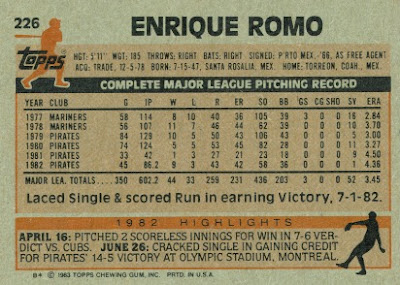 Flipside:  Since Romo never reported to the Pirates in '83 these are his career totals.  Romo's brother Vincente who pitched eight years in the majors also had 33 career losses and 52 career saves.  Enrique has him beat in the win column 44 to 32.
Oddball:  What more do you want?  You've got a surly spitballin' Pirate who looks like a pirate who went AWOL amid death threats...
Ok, one more tidbit. Romo hit a grand slam against the Mets on 10/1/1980 to give the Bucs a 10-3 lead.  Romo who entered the game in the sixth inning pitched the last four innings for the save.  Romo hit .270 (10/37) in his career with two doubles and his grand slam.
Career:  Romo bookended a brief but successful major league career between two stints in his native Mexico. Seattle fans will remember him as an original Mariner while Pittsburgh fans recall his days on the '79 champion Pirates.
Posted by Brandon at 6:02 PM