The last record breaker in the series documents John Wathan's breaking the single season stolen base mark for a catcher. 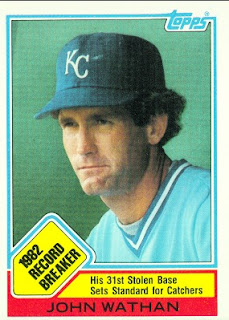 Wathan appears to be sitting in the dugout.  Once again I think Topps should have found a shot of Wathan on the base paths.
The look on his face always concerned me.  He looks like he's trying to remember if he turned the stove off when he left the house. 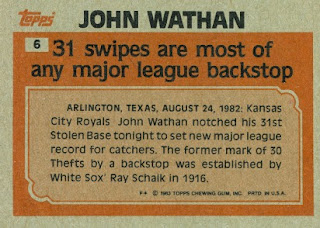 Wathan ended up with 36 stolen bases for the year which remains the all-time mark for catchers.  Amazingly Wathan set this record despite going on the disabled list with a fractured ankle on July 5.  He had been burning up the base paths prior to the injury with 25 steals through the Royals 77th game. He returned August 10 and promptly stole a base in his first two games back.  He slowed down in September stealing only one base in his last 17 games. For his career Wathan finished with 105 stolen bases.

That's it for the Record Breakers.