This is Von Hayes second Topps card and first of his own.  Hayes was known as a low key guy but man he looks like he just got shot with a tranquilizer dart in the action shot. 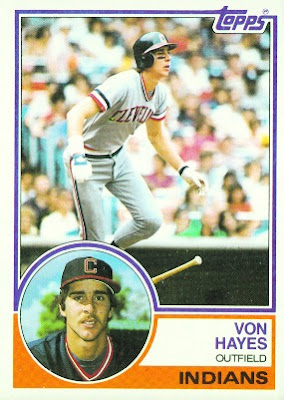 Player:  Von Hayes was a 7th round pick of the Indians out of St. Mary's College in California but spent less than two years in the minors before joining Cleveland big league roster.A third baseman in the minors the Indians were unsure where to play him so he mainly DH'd the last two months of the '81 season.  He hit .257/.346/.394 with a home run and showed off his good speed with 8 steals.

Hayes was the Indians starting rightfielder in '82 but also saw action in center, left, thirdbase and firstbase.  He didn't set the world on fire but he showed flashes of his ability with 14 HR and 32 stolen bases.  At 6'5" he could glide around the bases as well as the outfield.  The Phillies fell in love with him and traded Manny Trillo, Julio Franco, Jay Baller, George Vukovich, and Jerry Willard to Cleveland for Hayes.  As the young outfielder failed to live up to expectations, the Philly the fans taunted him with a "five for one" chant in reference to the trade.  Hayes was platooned and hit just six home runs in 392 plate appearances. He did steal 20 bases for the pennant winning Phillies but was a bench player in the postseason.  He went hitless in his only five at bats.

Better days were ahead for Hayes and as he moved to centerfield his production increased in 1984.  He batted .292/.359/.447 with 16 HR and 48 SB.  The Phillies tried Hayes as various times in the leadoff spot and he had a memorable game on June 11, 1985 when he led off the bottom of the first with a homer and later in the inning pounded a grand slam.  The Phils smashed the Mets 26-7 that day as Hayes later added an RBI single.  His numbers were down from the year before as he hit .263 with 13 home runs.

Hayes moved to first base in '86 and had a great year posting a .305/.379/.480 line with 98 RBI and an NL best 106 runs and 46 doubles.  Through the years Hayes had been improving his batting eye, drawing more walks every year since '83 and it culminated with him getting 121 freebies in '87.  He also topped 20 HR for the first time with 21 while going back and forth between first and centerfield.

Hayes played the first half of '88 with bone chips in his right elbow which eventually led to surgery in July.  Overall the year was a disappointment as he slugged just .409 in 423 plate appearances.  He came back with a strong year in '89 with a career best 26 dingers and 101 walks.  The power /  pateince combo led to an OPS+ of 140 and his only All-Star appearance.

Coming off perhaps his best year, Hayes was slowed by various injuries and played 129 games while hitting 17 home runs in 1990.  Hayes fell into a deep slump in '91 and was batting a meager .226 with no home runs when he was struck on the wrist by a Tom Browning pitch on June 14.  The pitch broke his arm and he missed 10 weeks.  He came back in September but ended the year with zero HR in 323 plate appearances.

After the '91 season the Philles traded Hayes to the Angels for Kyle Abbott and Ruben Amaro but Hayes was essentially done.  With the Halos he hit just .225 with 4 HR in 350 plate appearances.  At just 34 years old his once promising career was over. 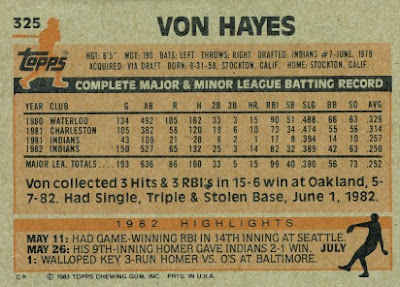 Flipside:  With Hayes reaching the majors just two years after he was drafted in the 7th round, it shows how much scouting has improved in the last 30 years.

Oddball:  Hayes blames his broken wrist on the demise of his career and I'm sure that it helped hasten his decline, but something else was already causing his rapid descent.  His lack of power in '91 was baffling and I can think of no other batter with his power to go so many plate appearances (250 before the injury, 73 after) without a HR.

Posted by Brandon at 2:00 PM No comments: