Man there is a lot happening on this card. First of all we see Steve Henderson bunting in a batting cage.  The bat has tape around the barrel which isn't something you often see on cards.  We have a tire from the rolling cage and the rarest find is what I think is a camera man on the left with blue jeans. How often do you see someone in jeans on a baseball card?
Also Henderson's badass mustache is readily visible in the inset.
Anyway, this is Henderson's sixth Topps card.  He would appear on ten base cards in his career from 1978-'88, with Topps omitting him from the '87 set. 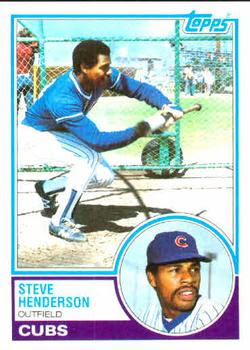 Player: Steve was one of three unrelated Henderson's to play OF in the 80's which I always found confusing (more on that later). He got his start in the Reds chain when he was drafted in the 5th round in 1974.  Henderson would find himself in the headlines before he made the majors when he was dealt with three others to the Mets in the July 1977 Midnight Massacre deal that sent Tom Seaver to the Reds.

The Mets immediately put him on the roster and despite the Big Apple pressure after the very-unpopular trade, Henderson batted .297/.372/.480 in 99 games.  The impressive showing allowed him to finish 2nd in National League ROY voting to Andre Dawson.  At one point Mets skipper Joe Torre claimed that "Someday the Seaver trade will be referred to as the Henderson trade".

The young leftfielder played nearly every day in 1978 but his batting average dipped to .266 and his slugging went down to .399.  Despite good speed he had a penchant for killing rallies with a league leading 24 double plays.

Prior to the '81 season the Mets dealt Henderson and cash to the Cubs for Dave Kingman. Henderson played well for his new team batting .293 with a .382 on base percentage.  The '82 season saw him him slump early and his average hovered around the Mendoza line for most of the summer.  A blazing August (.337 average) helped salvage the season a little, but he still ended up batting a career worst .233.

Henderson, by now 32 years old and a free agent signed a deal with the A's in '85 and batted .301 as the right-handed half of a platoon with Dave Collins.  After just two hits in 26 at bats to start the '86 season the A's released him.  He latched on with the White Sox but had to swallow his pride and play at AAA Buffalo the rest of the year.

Henderson found himself without a team in '87 but hooked back up with the A's franchise playing the first half of the year at AAA Tacoma.  He was called up mid-year and was a 5th outfielder behind Jose Canseco, Dwayne Murphy, Mike Davis, and Luis Polonia.  Henderson did alright batting .289 in 126 plate appearances.

The following spring he signed with the Astros and split the year between the parent club and AAA Tucson.  His .217 average, lack of power, and diminishing speed did little to convince anyone to keep him around and that would be his last season in the majors.

Henderson played all of '89 in AAA ball for the Pirates and spent the next two winters in the Senior Professional Baseball League before calling it a career. 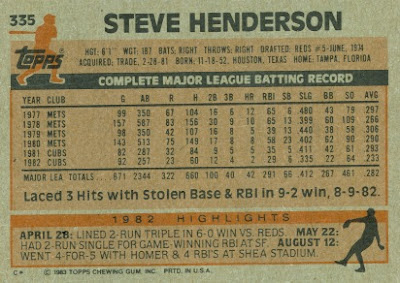 Flipside:  The '82 season was the first real stinker of his career.  He finished the year in a 1 for 23 funk.

Oddball: Steve was definitely the least popular Henderson of the three outfielders with that surname in the 1980's.  Of course Rickey is the Hall of Famer and everyone knew Rickey but Dave Henderson and Steve were for a long time like a whole different category Henderson.  Of course Dave later made a name for himself in the playoffs for the Red Sox in '86 and later part of the powerful A's teams.  But geez check out the chart below...teammates in Seattle for a while, both later on the A's, neither of them Rickey. No wonder I couldn't keep them straight.

History:   Henderson's career started with a lot of promise and although he went on to play 12 seasons the 12 HR and .852 OPS he posted as a rookie would prove to be career highs.  At first glance the stats for Henderson can look more positive than you would expect.  A career 114 OPS+, a .280 BA and .352 OBP aren't too shabby but some digging revealed some weaknesses in his game.  Perusing the scouting reports on him from the 1980's most pointed out that he had trouble with inside fastballs.  Once that became apparent pitchers attacked him there.  He was fast but the raw talent didn't translate to the basepaths as he had several seasons where he was caught stealing more times than he was successful.  Despite his speed,  Henderson was considered a liability in the field which further hurt his chances to play everyday.
Although he may not have lived up to the potential that many thought he had, Henderson still had a nice career.
Since his playing career ended Henderson has been a coach at many different stops.  He was recently let go from his hitting coach position with the Phillies.
Posted by Brandon at 6:39 PM 3 comments: 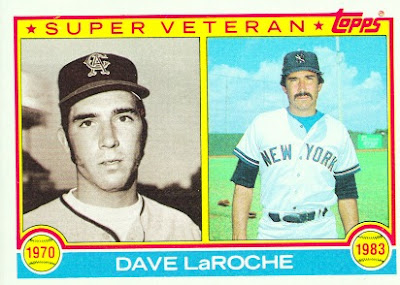 Then and Now:  The 21 year-old Dave LaRoche was a fresh faced rookie in 1970.  He blazed through the minors in two plus seasons after he was drafted in the 5th round by the Angels in 1967. Fourteen seasons isn't exactly a super-veteran compared to some of the other superstars and this is one of the weakest super-vet cards in the subset.  If the 70's taught LaRoche anything, it was how to grow a mustache.  He was clean shaven on his base card and certainly looks more menacing here.

Career Span:  5/11/70 - 8/23/83
The Angels were a very young squad in the early 70's but when LaRoche was traded to the Twins he played with Harmon Killebrew who started his career way back in 1954.
Fast forward to 1982 and LaRoche shared a locker room with a young Mike Morgan who would go on to pitch until 2002.

All-Star:  LaRoche made the AL All-Star squad in back to back seasons in '76 and '77.  He did not play in the '76 game but pitched an inning the next year.  After inducing ground outs from Dave Parker and George Foster, Dave Winfield doubled, Ron Cey walked, but Pete Rose flew out to right field to end the threat.
LaRoche didn't factor into the decision as the NL blasted Jim Palmer for five runs early and never gave up the lead.

League Leader: LaRoche never lead the league in any significant category.  He finished top five in saves on four occasions.

All-Time:  LaRoche is 68th all-time in games finished (381). When this card came out LaRoche was 10th all-time in saves but his 126 saves is only good for 108th all time these days.

Postseason:   LaRoche appeared in the postseason just twice.  First in the 1979 ALCS and then two years later in the World Series for the Yankees.  Both times he pitched for the losing side in a lopsided game.

Cy Young:  Nope, not even a single vote

MVP:  Despite the shutout in CYA voting he did manage to finish 25th in the 1978 AL MVP vote.

Hall of Fame:  Zero votes received.  Although an effective reliever for most of his career, it's no surprise that LaRoche isn't in Cooperstown. 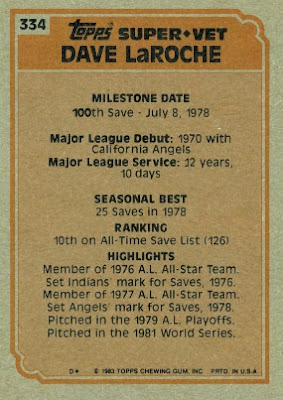 Posted by Brandon at 8:37 PM No comments:

This is the 13th and final regular issue card of Dave LaRoche's career and he looks kind of sad about it. The action picture reminds me a bit of another lefty reliever, Mets Jesse Orosco who comes along later in the set.. 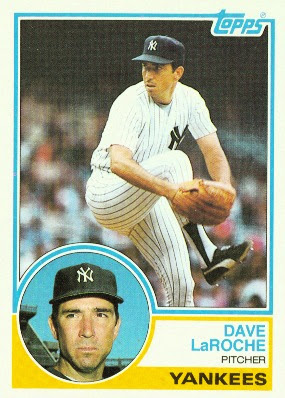 I can't help but think of comedian/ventriloquist Jeff Dunham's character Walter when I see LaRoche's inset pic.  What do you think?

Player: Dave LaRoche was drafted in the 5th round by the Angels in '67 and cracked the big leagues three years later.  LaRoche would appear in a total of 38 games in his rookie season and earned four saves with a 3.44 ERA.

LaRoche's second year was even better with a 2.50 ERA and nine saves in 72 innings but he would be traded to the Twins in the offseason,  In Minnesota for the '72 campaign he had a solid season (2.84 ERA, 10 saves) but was traded to the Cubs where he labored through two poor seasons.

Before the '75 season he was dealt with Brock Davis to the Indians for Milt Wilcox. Already on his fourth team of his career, LaRoche flourished in Cleveland saving 38 games with ERAs of 2.19 and 2.24 in the '75 and '76 seasons.  He struggled out of the gate and '77 and was shipped to the Angels in a four player deal. Back with his original franchise, LaRoche had two good years and two mediocre campaigns over the next four years.  Mainly used in late relief he tallied 52 saves but he made nine starts in 1980 for the Halos, the only time he really spent any meaningful time in a starting rotation.

The Angels cut LaRoche loose in spring training in '81 and he caught on with the Yankees a few weeks later. LaRoche had a very good year in middle relief with a 2.63 ERA in 47 innings.  In fact, LaRoche was carrying a 0.62 ERA in August when he made a spot start and gave up four runs.

The veteran lefty started the 1982 season with AAA Columbus and was sent up and down on four occasions.  With the Yanks he pitched 50 innings with a 3.42 ERA.  1982 was the end of the road for LaRoche, as he made one more appearance in the majors allowing two runs in one inning in an August swan song. 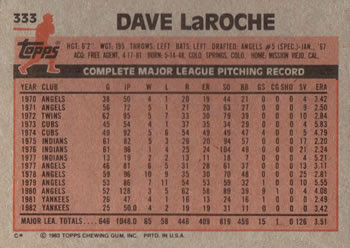 It can be hard to read the stats but LaRoche had a rubber arm often working more than 80 innings a year.

LaRoche was known for his eephus pitch which was called the LaLob as seen here.


History: LaRoche was a well regarded reliever in his day making two All-Star teams.  You can read more about him in the next post as Topps featured him on a Super Veteran card.

The LaRoche name is best known these days because of his son and grandson.
Posted by Brandon at 5:11 PM 4 comments: