This is Joe Pittman's second and last Topps card.  The green border usually clashes on the Padres cards but it works here as goes nicely with the green grass.  The inset pic look like it was taken right before or after the main photo.  Like a lot of cards from this set, I think this in Candlestick Park.
I always thought Pittman looked like a little guy on this card but he is listed at 6'1". 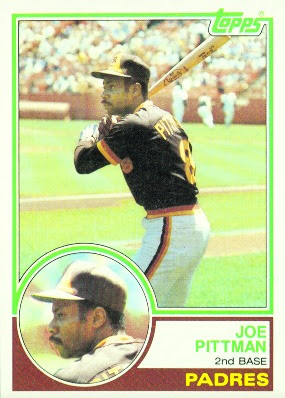 Player: In 1975 Joe Pittman was a 5th round pick of the Houston Astros and as a 22 year old coming out of college, he was given an aggressive assignment to AA Columbus to start his pro career. Despite his advanced placement, Pittman didn't reach the majors until six years later when he was promoted in April of 1981.
Pittman had an excellent season at AAA Tucson in 1980 but was blocked by future Hall of Famer Joe Morgan at second base.  With Morgan gone in '81, the Astros had a revolving door at second and employed Pittman, Rafael Landestoy, Dickie Thon, and late year acqusition Phil Garner.  Pittman batted .281 with a .333 on base percentage and was a plus on defense as well.  Although he only played 35 played games in the field he was fourth in the NL in Total Zone Runs at 2B.  Pittman made the postseason roster but was relegated to a bench role and went 0-2 in the NLDS loss to the Dodgers.

Pittman spent most of the early part of the 1982 season back in the minors before a June trade sent him to the Padres.  In San Diego Pittman was used at both second and shortstop as well as a pinch hitter.  Pittman never really adjusted to a role as a reserve batting .185 off the bench compared to .267 as a starter.

With the exception of 17 games with the Giants in '84 Pittman spent the next three years at the AAA level before leaving pro ball. 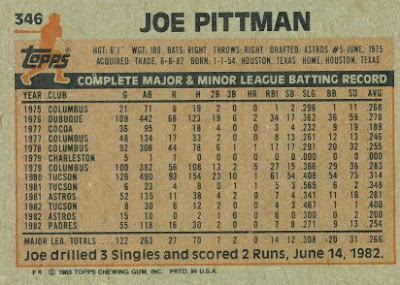 Flipside:  The Houston native had to be thrilled to be drafted by the Astros.  It seems that teams used to draft more hometown guys than they do now.

Oddball: Pittman was one of the leading batters in the 1990 Senior Professional Baseball Association when he posted a .337 batting average.

History:  Pittman was a speedy infielder who didn't get on base enough or hit for enough pop to reach the big leagues at a young age.  Once he got there he struggled to keep his head above water. After his playing career he coached in the Astros system for a while.  Later employed in construction, Pittman passed away in 2014 when he collapsed on the jobsite in 2014.
Posted by Brandon at 11:49 AM 2 comments:

This is Jim Clancy's 6th Topps card.  His right arm blurs as he follows through with a pitch and the bright background is out of focus too.  Jim looks slightly perturbed in the inset.  Maybe it's because he is without his familiar mustache. 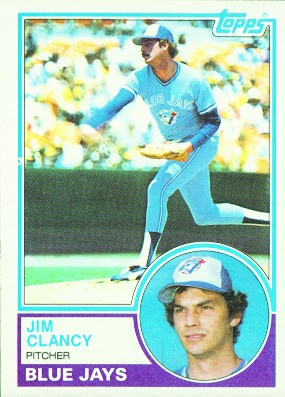 Player: Jim Clancy was drafted by the Rangers but never played for them.  The Blue Jays made Clancy their 6th pick in the expansion draft and he made 13 starts in 1977.  He was a regular in the Jays rotation in '78 but was injured for much of the '79 season.  We wasn't very successful in either campaign but he started to to put it together in 1980.  Although he walked a league high 128 batters he logged an impressive 250 innings with a 3.30 ERA.

The '81 season was a step backward as Clancy's ERA ballooned to 4.90.  Clancy would start 40 games in 1982 and barring a dramatic change in pitcher usage, that's something we likely won't see again. He put in 266 innings of work with a neat 3.71 ERA, earning him his lone All-Star selection.

The next six years Clancy would he a workhorse for Toronto and seemed to be either a little better than average or a little bit below average.  Considering the nine seasons he spent with the Jay's in the 80's Clancy was 112-112 with a 4.02, pretty much your average number three or four starter.

After the 1988 season the Houston Astros signed the 32 year-old righty to a three year deal paying out over a million dollars a year.  If you thought this signing was a bad idea you were right. Clancy won just nine game in two and a half years with the Astros.  Having been demoted to the pen he found some success during the '91 season and was traded to the Braves halfway through the year. Even though he struggled in Atlanta, he found made the playoff roster and won game three of the World Series, recording the final out in the top of the 12th before the Braves walked it off in the bottom frame.

Clancy retired after failing to catch on with the Cubs in 1992, ending his career with a 4.23 ERA in his 15 season of work.. 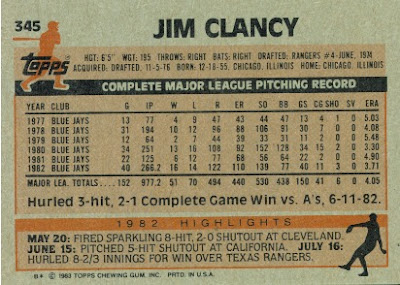 Flipside: The 1982 totals are all pretty much career bests for Clancy as he finally was able to command his pitches and lower his walk rate.

Oddball: I remember Clancy pitching a lot against my Tigers in the 1980s and for good reason as Clancy had a 4-17 record against Detroit.

History:  Often playing second fiddle to Dave Stieb, Clancy did make two opening days starts in 1981 and and 1984.  He had a rubber arm and was a bit of a throwback even for his era. According to baseballreference.com, Clancy made eight starts on two days rest and 58 on three days rest in his career.  In fact his 40 games started in '82 was the last time a non-knuckleballer started that many.
Even though he is known as having the most losses in the 1980s (126), he helped the Blue Jays go from struggling expansion team to a top flight team in the AL East.