This is Mike Krukow's 7th Topps card but his only base card in a Philly uniform.  You don't think pitchers put a lot of strain on their arms?  Put your arm in the same position as Krukow's right wing.  Not too comfortable is it? 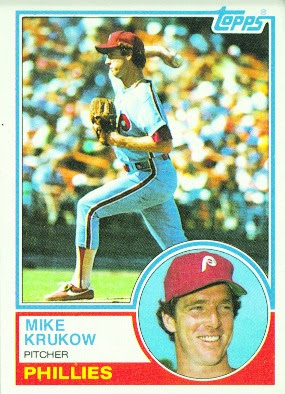 Player: Mike Krukow was an 8th round pick of the Chicago Cubs in the 1973 draft and after posting ERA's in the mid to low three's in four minor league seasons he was called up to the big leagues late in 1976.  He allowed four runs in 4.1 innings in his September trial.

Krukow made 33 starts for the Cubs in '77 with a 4.40 ERA (100 ERA+) and won eight against fourteen defeats.  He didn't work deep into many games completing just one and logging 172 frames.  When '78 rolled around Krukow found himself the fifth starter in a four man rotation.  He was used sparingly in April and May and was sent down to the minors for a month before returning in late June when the Cubs returned to a five man set.  He won nine, lost three, and posted a 3.90 ERA (103 ERA+) in 138 innings.

Krukow settled in as an average to below average inning eater the next few years.  The next three his WHIP ranged from 1.38 to 1.53 with adjusted ERA's from 90 to 101.  After the '81 season he was dealt to the Phillies in a trade that sent Keith Moreland and Dickie Noles to Chicago.

His '82 season in Philly saw him work 208 innings, win 13 games, and post a 3.12 ERA.  All of which were new career bests for the 6'4" righty.  His time in Philadelphia was limited to just one season as they flipped him and Mark Davis to the Giants in return for Joe Morgan and Al Holland.

Now pitching in his home state, the Long Beach native looked more like the Cubs version than the Philly version.  He won 11 games in both '83 and '84 but was generally easy to hit allowing an NL high 234 hits in '84.

With pitching guru Roger Craig taking the reins in San Fran, Krukow ditched his slider in favor of the split-finger pitch that Craig taught his disciples.  The results was an out pitch to both left and right handed batters and his WHIP dropped to 1.156 in '85 and 1.057 the following year.  The '86 season would prove to be Krukow's finest as he won 20 games with a 3.05 ERA (116 ERA+) in 245 innings.  He finished 3rd in CY voting, 15th in MVP, and represented the Giants in his lone All-Star appearance.

Whether it was the fact that he was now in his mid-thirties or coming off a career high inning total, Krukow was never the same.  He pitched through shoulder pain the rest of his career, never topping 168 innings or seven wins in his last three years.  He made his lone postseason appearance in the '87 NLCS tossing a complete game against the Cardinals allowing just two runs in the win. 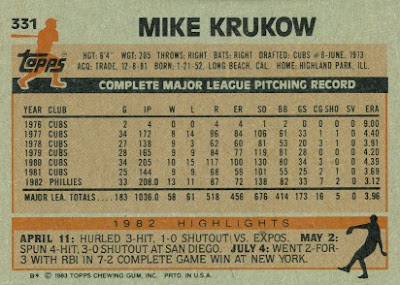 Flipside:  It's amazing what leaving Wrigley Field will do for a pitcher's statistics.

Oddball:  Krukow hit five home runs in his career which is four more than his Giants broadcast partner Duane Kuiper.  The light hitting infielder had plenty of opportunity batting 3,754 times to Krukow's 819.

History: Krukow was known as a battler and he was able to have a decent career marked by a big season under Roger Craig.  Krukow finished with 21.5 WAR, with four season between 2.0 - 2.3 and three more between 3.0 - 3.4.
These days, he and Kuiper are a popular duo among Giants fans.  Krukow gets a lot of mileage from his baseball jargon, some of which has been assembled here.
Posted by Brandon at 4:22 PM 2 comments:

Buddy Bell is looking very red, white, and blue on his 11th Topps card.  I thought maybe the green blob near his hands was a defect on my card but they all seem to have it.
Bell's image in the cameo pic reminds me of one of the maintenance guys at work. 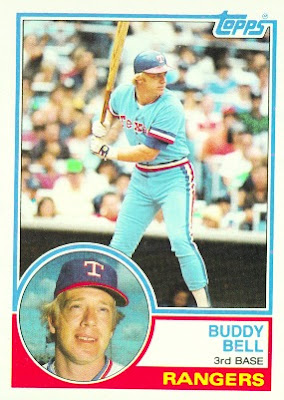 Player:  Buddy Bell was a 16th round pick of the Cleveland Indians in the 1969 draft.  Buddy played three years in the minors and never returned after he made the Indians big league squad as a 20 year old in 1972.  The Indians had another young thirdsacker in Graig Nettles and the Tribe used Bell in the outfield with just six games at third.  Although he batted just .255 he showed good contact ability striking out just 29 times in 505 trips to the plate.  In November Cleveland traded Nettles away to the Yankees which opened the door for Bell.

Bell was the Indians everyday thirdbaseman for the next seven seasons and while he didn't do a lot of damage at the plate, he proved himself as an excellent glove man at the hot corner.  He batted between .262 and .292 his remaining years in Cleveland with double digit HR's three times.  After the 1978 season Bell was traded to the Rangers for Toby Harrah.  At the time it was considered a trade of a defensive player in Bell for Harrah who was an on base machine and making the transition from SS to 3B.  In reality it was not that much separating their offensive games as Bell's adjusted OPS was 103 vs Harrah's 113.

Once in a Ranger uniform, Bell's hitting improved as he hit .299 with 18 HR and 101 RBI while playing in all 162 games. He really found his groove and despite some injuries enjoyed his best years in the Lonestar state.  With Brooks Robinson now in retirement Bell was recognized as the AL's best defensive thirdbasemen winning Gold Gloves six year straight seasons from '79-'84.  He added a Silver Slugger award in '84 and received MVP votes in five seasons with a high finish of 10th in '79.  Over that same stretch he posted a 123 OPS+ averaging 14 HR with .300+ batting average twice.

When Bell slumped in '85 the Rangers allowed rookie Steve Buechele to take over at third and traded Bell to the Reds.  Bell struggled all year and batted just .229/.309/.350.  He was now in his mid-thirties but proved he wasn't washed up with back to back productive seasons clubbing a career best 20 HR in '86 and following up with 17 in '87 posting OPS+ of 119 and 107 respectively.

Bell battled injuries in '88 and was scuffling with just 10 hits in 63 at bats when he was traded to the Astros in June.  In Houston he posted a .253/.301/.353 line in 74 games and was released after the season.  He signed on with the Rangers but played sparingly as a DH and spare corner infielder before retiring in June. 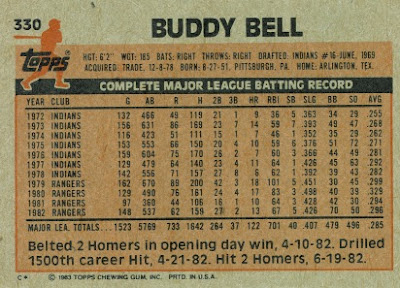 Flipside: Buddy was born in Pittsburgh in 1951 during his dad Gus' was in his second year in the majors with the Pirates.

Oddball:  While he was with the Indians, Bell once switched spots with thridbase umpire Ron Luciano during a spring training game.  According to theclevelandindianfan.com:
In a Spring training game in 1973, Ron Luciano was the third base ump for a game involving Bell and the Indians.  Buddy Bell was having a terrible day in the field, and Luciano was letting him have it- telling him to keep his glove down, to bend over more, and so on. Bell told him that if he made one more mistake, he was going to ump and Luciano was going to play third base. Sure enough, a ground ball scooted through Bell’s legs. Bell handed Luciano his glove, and they exchanged hats. Completing the role reversal, Bell began to taunt Luciano, who suddenly began fearing for his life as he stared in at the hitter. Nobody hit a ball at him- but with a man on first, a batter hit a ball to right field. The base runner rounded second and steamed toward third. Toward Luciano. The right fielder came up throwing and the nervous Luciano screamed at Frank Duffy to cut off the throw. Duffy, laughing, waved his glove at the ball and it zipped through to third base. Luciano caught the ball, later admitting it was in self defense. Bell called the runner safe, and the overweight Luciano righted himself before throwing to second to try to cut down the trailing runner. Luciano’s throw sailed high, and Jack Brohamer lunged to catch it while backing up the play. He flipped the ball to Duffy, who tagged the runner- who was now standing on second base. The call at second was “OUT!”, and when the runner began to object, he was reminded whom it was that had thrown the ball from third. So he put his head down, spat, and ran back to his dugout!

Oddball 2:  Bell's last three games as a player were Sammy Sosa's first three in the majors with the Rangers.

History:  Thirdbasemen seem to be under rated among their peers throughout baseball history and David Gus "Buddy" Bell is no exception.  He finished his career with 2,514 hits, a 109 OPS+, and is 25th all-time with 23 dWAR.
Bell's managerial career has been less successful with just one winning season in nine seasons split among some sketchy Tigers, Rockies, and Royals teams.  He currently works in the front office for the Chicago White Sox as Vice President of player development.
Bell has lent his support to various epilepsy charities a disease he was diagnosed with after an episode when he was 22.  He kept his condition from the public during his playing days not disclosing his battle until he was managing.  Fortunately medicine has kept him seizure free for over 20 years.
The Bell family has left quite a stamp on baseball history with his dad Gus playing from 1950 to '64 and his sons David playing from '95-'06 and Mike playing in 2000.  From 1950 to 2006 there was a family member playing in 45 of the 57 seasons.

Posted by Brandon at 2:54 PM No comments: