A lot of orange on this card as Atlee Hammaker appears here on his first solo card after sharing a three player card in the '82 set when he was still with the Royals. 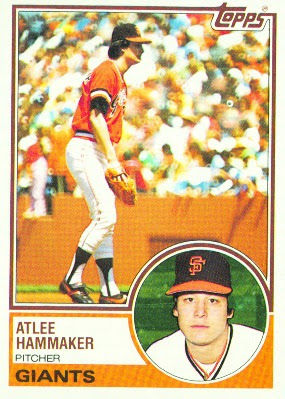 Player:  Hammaker was a first round pick of the Royals in '79 and made his MLB debut two years later.  The young lanky lefty allowed 24 runs in 39 innings and was traded the following spring to the Giants in the Vida Blue trade.

Hammaker didn't start the year with San Fran but entered the Giants rotation in May and had an up and down season, finishing with a 4.11 ERA in 27 starts.

Everything was peachy as the '83 season started.  He had a 1.70 ERA at the All-Star break but was bearing the burden few knew about; his shoulder was killing him.  Specifically his rotator cuff. Despite the pain he went to the All-Star game where there was little margin for error.  He allowed seven runs in just 0.2 innings including a grand slam to Fred Lynn, the first in All-Star history. Although his injury limited him to just eight starts the rest of the year, he won the NL ERA title with a nifty 2.25 mark and had the lowest WHIP and BB/9 in the majors.

The surgery recovery and bone spurs limited him to six starts in '84.  Hammaker made 29 starts in '85 but the Giants were pretty awful and he won just five games despite a league average performance.

The '86 season was a wash as he missed the entire season with a shoulder injury and surgery to both knees.  He was fairly effective when he came back with ERAs between 3.58 - 3.76 over the next three years as he bounced from the rotation to the pen.

Hammaker's ERA rose over four in '90 and the Giants cut him loose in August.  He signed on with the Padres and pitched briefly for them at the end of '90 and one game in '91.  He sat out the '92 and '93 seasons recovering from Tommy John surgery.

By the time '94 rolled around many had forgotten about the lefty, but Hammaker returned to the majors with the White Sox after some success with their AAA team.  Two scoreless outings in relief meant things were looking up.  The success helped land him a job in the Pale Hose pen in '95 as a lefty specialist but it didn't work out as he allowed nine runs in 6.1 innings.  Hammaker was released and retired from the game. 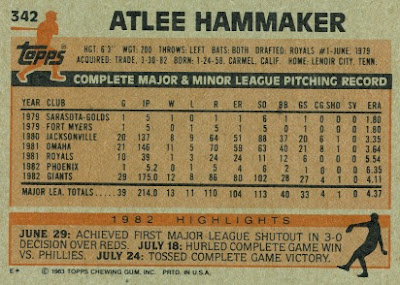 Flipside:  Three complete games within four weeks in the 1982 highlights!  This was actually was part of a stretch of 52.2 innings over six games.  At that point his arm fell off and the Giants trainers held it together the best they could with duct tape.  I joke, but of course it's hard to say if the workload did him in or not. but he wouldn't see that workload today.

Oddball:  Hammaker warned his five daughters not to date ballplayers but at least one didn't listen and married the Indians Yan Gomes anyway.

History:  Hammaker, whose mother is Japanese, was one of the first Asian-American players in the majors following Mike Lum and Lenn Sakata.  His career was derailed by injuries and unfortunately he is remembered by some for his All-Star game and postseason failures.  In the early 80's Hammaker's future looked bright but he is on a long list of player's who were let down by their health.

One of the more unique action shots in the set, Doug DeCinces is observed catching pop-up in the bright sunlight.  This is the veteran's ninth Topps card and his first as an Angel. 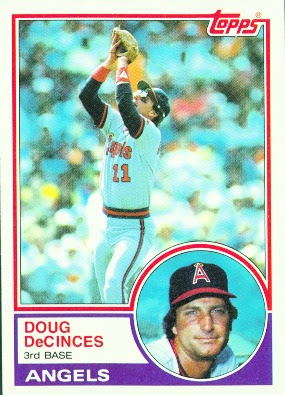 Player:  Doug DeCinces was an up and coming infielder with the Orioles at a time when they just didn't have room for him.  With future hall of famer Brooks Robinson at third, Mark Belanger at short, and Bobby Grich at second, the O's infield was crowded.  DeCinces had a cup of coffee in '73 and in a single major league game in '74 before sticking as a utility infielder in '75.

With Robinson now 39 years old, Decinces grabbed a bigger chunk of playing time in '76 and despite run-ins with manager Earl Weaver and Baltimore ownership, he eventually settled in at third base. Harsh treatment from Weaver and unfair comparisons to Robinson would plague him his entire stay in Baltimore.

DeCinces spent six years as a starter for the Orioles with his best season with them coming in 1978 when he clubbed 28 HR, slugged .526 and posted a 149 OPS+.  The rest of his Baltimore tenure, before and after, he never hit more than 19 HR or hit higher than .263.

Bookending Baltimore legends, DeCinces was sent packing after the 1981 season to make room for Cal Ripken at the hot corner.  Had the O's realized that Cal could be much more than adequate at short maybe they would have held on to DeCinces.  Instead they swapped him to California for Dan Ford.

DeCinces got a fresh start in California. A notoriously slow starter, he caught fire in the second half batting .340/.412/.653.  He finished the year with career highs in BA .301, 2B 42, HR 30, RBI as he won the Silver Slugger at thirdbase and finished third in MVP voting.

He spent the next six years with the Angels generating good but not always great numbers hitting 16 to 26 HR each year with 2 or 3 WAR seasons.  The Angels cut DeCinces at the tail end of the '87 season and he was picked up by the Cardinals.  He went 2 for 9 with the Redbirds to cap his MLB career.  He traveled to Japan to play one year for the Yakult Swallows. 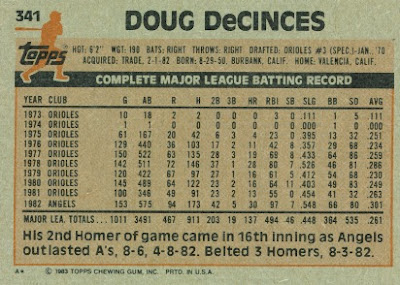 Flipside:   DeCinces hit three home runs on 8-3-82 and three more on 8-8-82.  That seems the most impressive thing about his season and should have been at the bottom of this card.  Or maybe "Doug started August with 14 hits and 9 HR in 28 at bats."

Oddball:  A very good bio on DeCinces tells me among other things that he broke his nose four times.

History:  I remember DeCinces as one of the veterans with the Angels who came close but didn't reach the World Series.  It wasn't until after he retired I realized he had been in the '79 World Series. In the fall classic DeCinces slugged a HR in his first WS bat but was 4 for his next 24 as the O's dropped the seven game series to the Pirates.
Then in California, DeCinces and the Halos were knocked out of the ALCS in '82 and '86 with both series going the distance.

Looking back at his career, I can't help but think that DeCinces never was able to live up to his full potential.  Injuries were certainly a factor as he played more than 140 games just four times.  All in all a very good career though.

Posted by Brandon at 7:16 PM No comments:

Another card full of the color blue!   Veteran Larry Gura is seen here following through with his left handed throwing motion on his 12th Topps card. 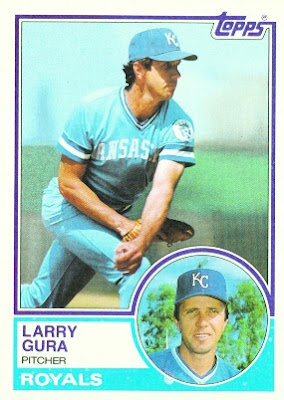 Player: Illinois native Larry Gura was drafted in the 2nd round by the Cubs in 1969 after playing collegiate ball at Arizona State. He made his  MLB debut in 1970 but Gura's career took a while to get going as he never established himself in Chicago and was traded to Texas after the '73 season and to the Yankees in May of '74.

Gura was the Yankees number five starter in 1975 and won seven games with a 3.51 ERA in 151 innings.  Gura was unable to secure a spot in the Yankee rotation in '76 and was traded to Kansas City where he was a little used long man most of the year although he spun a four-hit shutout in one of his four starts.

Gura again worked primarily out of the pen in '77 with 10 saves and a 3.13 ERA.  Gura would find himself in an out of the rotation in '78 before landing there for good in late July.  Although he made just 26 starts his 2.72 ERA helped him get votes in CYA voting (7th) and a token MVP vote (23rd).

Now 31 years old, Gura averaged 32 starts a season over the next five seasons as he became a mainstay of the KC rotation.  A rough start to the '79 campaign doomed that season (4.47 ERA) but he bounced back with a monster campaign in 1980.  Gura logged an iron-man 283 innings with a 2.85 ERA, and made his lone all-star team and finished 6th in CYA voting.

The southpaw continued to get outs at a proficient clip during the '81 strike season but was average or well below the rest of his career as his ERA went from 2.72, 4.03, to 4.90. Although KC was getting back to their winning ways Gura struggled through the 1984 season and was released in May of '85 as the youth movement was in full swing with the likes of Saberhagen, Gubicza, and Jackson.

Gura returned to the Cubs but allowed 19 runs in 20 innings and was released, thus ending his 16 year career. 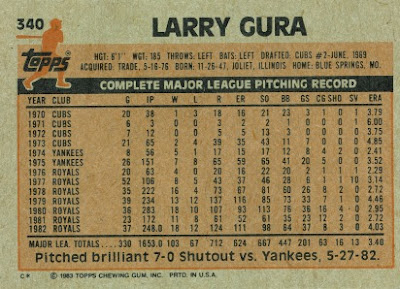 Flipside: You can see from his yearly stats that Gura was a late bloomer but he didn't spend much time in the low minors.  The Cubs placed him in low-A ball to start his career but promoted him later that year all the way to AAA.  Gura would pitch at least part of seven more seasons in the minors but they were all in AAA.

Oddball:  Gura may be the only player whose tennis hobby helped get him traded.

History:  Gura had a strange but long career in pro ball racking up 126 wins with a 3.76 ERA.  Many remember him for his success against the Yankees once they traded him away.  The numbers bear this out.  In 20 career starts he did very well with 11-6 record, 3.10 ERA and 10 complete games.  His postseason experience pitted the Royals against the Yankees four times with mixed results.