Looks like Bob Bailor is running downhill on his 6th Topps card with Shea Stadium in the background.  It's a n excellent action shot that would be better if he wasn't wearing the Topps logo on his head.  Couldn't they have reduced the size another five percent?

Strange to see the 3B-SHORTSTOP-2B designation.  Seems like the 3B-SS-2B would suffice.  In fact that's what Topps did on his next two cards.  I wonder how they chose the order since he played more 2B and SS than 3B in these three seasons. 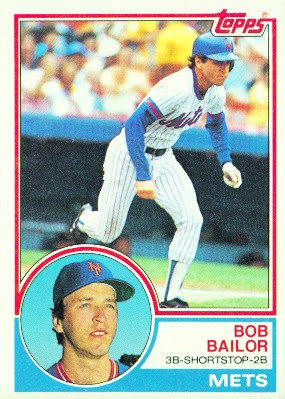 Player: Bob Bailor came up through the Orioles system and found it tough to crack the big league roster in the mid-70s. This depth along with a rotator cuff injury limited him to 13 big league at bats over the '75-'76 seasons.  Bailor got his break when the AL expanded and Toronto made him an original Blue Jay.

Bailor played all over the diamond in '77 and was a regular in the Jays lineup posting what would prove to be career numbers with a .310 BA and five of his nine career homers.  He remained an everyday player the next two years but saw his productivity drop each year.  By 1980 he was more of a utility man and played everywhere but first base and catcher.  He even made three appearances on the mound.

After the '80 season he was sent packing to the Mets in exchange for Roy Lee Jackson.  He had just 81 at bats in '81 but he batted .284.   Bailor earned more playing time the next two-years as a "play anywhere" guy and if nothing else provided stellar base running with 38 steals in 44 attempts.

Bailor was traded after the '83 campaign to the Dodgers in the Sid Fernandez deal.  He was pretty much a bench player with less than 150 plate appearances each year.  The Dodgers cut Bailor in the spring of '86.  He sat out the '86 season and then coached in the Jays organization through the '95 season before retiring from pro baseball. 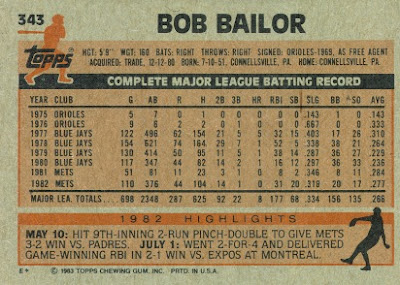 Flipside:  Another significant discrepancy in height as Topps lists Bailor at 5'9" and baseballreference.com lists him at 5'11"

Oddball:  Bailor didn't play baseball in high school because his school didn't field a team.  He made his mark in American Legion ball.  Although un-drafted he caught the eye of scout Jocko Collins who signed him for the O's.

Playing winter ball in Venezuela he was at the beach with some teammates on New Years Day 1974 when pitching prospect Mark Weems drowned in the undertow. Bailor and his fellow farmhands searched for three days but could not locate Weems' body.

History: Bailor was a good glove defender whose versatility helped him get to the big leagues and carve out a decent career.  He was pretty aggressive hitter not taking too many pitches so he neither walked nor struck out much.  He hit well enough (.264 career average) that he often was able to earn starter playing time.
The scrappy Bailor was an original Blue Jay which is probably his biggest claim to fame.  He returned to coach first base with Toronto and won championship rings in '92 and '93.