This is Bruce Sutter's seventh Topps card.  The card captures Sutter's split-fingered grip in action.  It almost looks like a knuckle ball grip the way his fingertips are curled, but if you look a this pic you can see how Sutter grips it. 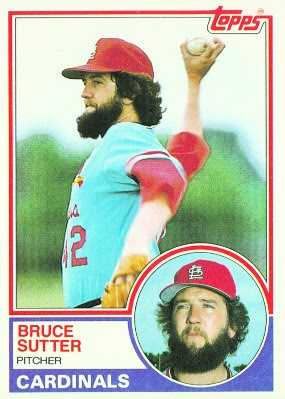 Player: Bruce Sutter signed a free-agent deal after one year at Old Dominion and started his career in the Chicago Cubs organization in 1972.  A reliever with a high 80's fastball, Sutter learned the split-fingered fastball from pitching coach Fred Martin in 1973.  Sutter finished '73 with a 4.13 ERA, but he would have ERA's of 1.38, 2.15, and 1.50 over the next two plus minor league seasons.  With his trick pitch refined he was called up to Chicago in May 1976 and stayed with the team the rest of the season.  Sutter saved 10 games his rookie year, with a 2.70 ERA in 83 innings.
Sutter's second year was phenomenal and one of the top seasons by a modern relief pitcher.  He struck out 129 batters in 107 innings with a 1.34 ERA and 0.857 WHIP.  He saved 31 games, was voted to his first All-Star team, and finished top ten in both CY and MVP voting.
Sutter's rate stats climbed in '78 but he still had a solid year with 27 saves.  In 1979 he tied a NL record with 37 saves.  He logged 101 innings with a sharp 2.22 ERA and won the NL Cy Young award.  He followed that up with 28 more saves and a 2.64 ERA in 1980.  In December, Chicago sent Sutter and Ty Waller to St. Louis for Leon Durham and Ken Reitz.
With the Cardinals in '81, Sutter didn't miss a beat saving 25 with a 2.62 ERA.  Manager Whitey Herzog leaned on Sutter heavily in '82 and he responded with 36 saves in 102 innings as the Redbirds flew into the postseason.  Against the Braves in the NLCS, he earned the win in Game 2 and the save in Game 3.  In the World Series against the Brewers, he was touched for four runs in 7.2 innings but he was good enough to earn a win in Game 2 and saves in Games 3 and 7.
Sutter struggled to command his splitter in '83 and he failed to lead the league in saves for the first time in five years.  His 4.23 ERA was a full run higher than his previous high.  He returned to dominance in '84 as he tied the MLB record with 45 saves.  Sutter pitched in a career high 122 innings and had a minuscule 1.54 ERA.
After the '84 season, Sutter signed a $10.4 million six -year deal with the Atlanta Braves.  He never was in prime form with the Braves as numerous injuries decimated his fine career.  He had a 4.48 ERA with 23 saves for the Braves in '85.  He missed most of '86 and all of '87.  He returned in '88 after having surgery to repair nerve damage to his shoulder but was ineffective with a 4.76 ERA in 38 games.  He re-injured his shoulder in spring training in '89, which cost him the entire season.  At the end of the year the Braves cut him loose and his career was over.
Sutter retired with exactly 300 saves and a 2.83 ERA in 12 seasons.
Stuff:  Splitter, fastball high 80s, and slider﻿ 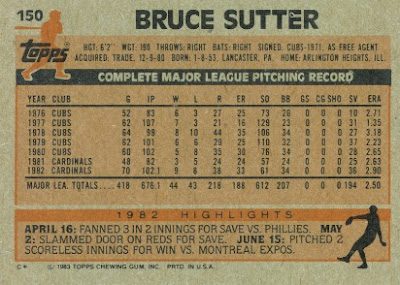 Flipside: Sutter never started a game in the major leagues and only two in the minors.  I searched his game logs and Sutter pitched five innings in relief on three different occasions.

Oddball:  Sutter's huge contract with the Braves was quite complicated.  He was actually paid $750,000 per year for six years with the rest of the money deferred.  Once the contract ran out in 1990 he would be paid $1.3 million per year for the next 30 years!

History:  Sutter won a World Series with St. Louis in '82 and was baseball's dominant closer from '77-'84.  He was renowned for popularizing the split fingered pitch and elected to the Hall of Fame in 2006.  Check out tomorrow's post for Sutter's Super Veteran card where his accomplishments will be explored in more detail.
Posted by Brandon at 11:58 AM