After sharing a rookie card in the '82 set, Johnny Ray appears here on his first solo card.  I like the action shot of Ray following through with a throw to first base. 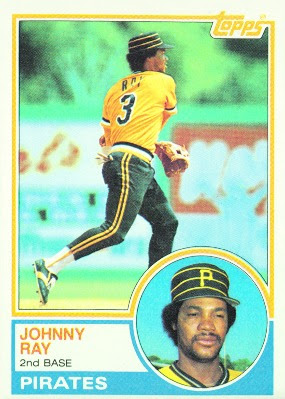 Player: Johhny Ray was tearing it up at Tucson in 1981 when he was the main player player among three to go to Pittsburgh in exchange for veteran Phil Garner.  At the time of the trade Ray was batting .349 with 50 doubles, 10 doubles, and 5 HR in 525 AAA at bats .  The Pirates immediately promoted him to the big leagues.  Over the last month of the season, Ray hit .245 with another 11 doubles, giving him 61 combined on the year.
Ray would become a fixture at second base for the Pirates.  He played in every game in '82 and posted a .281/.318/.382 line.   He made good contact, striking out only 34 times and stole 16 bases as well.  Ray finished a close second to Steve Sax in NL Rookie of the Year voting.
The switch-hitting Ray was very consistent over the next six seasons, playing 150+ games every year with batting averages between .274 and .312.  He continued to be a double machine hitting 38 in both '83 and '84 to lead the NL.  He was rewarded with a Silver Slugger award in '83 and although Ray was a good defensive player, he never won a Gold Glove as  Ryne Sandberg had that award locked up in the 80's.
During the '87 season Pittsburgh had young Jose Lind knocking at the door and the Pirates decided to trade the 30 year-old Ray.  The sent him to the Angels in exchange for Miguel Garcia who would go on to pitch less than 20 innings for the Bucs.  Ray topped .300 for the third time when he hit .306 for the Angels in '88 and he made his first All-Star team.
Ray battled injuries in '89 and played in only 134 games.  He batted .289 and continued to be a tough man to strike out.  He finished top-6 in AB/SO every year from '82-'89.  Nagging injuries bothered Ray all year in 1990 and he appeared in just 105 games while batting .276.
A free agent entering the '91 season, Ray signed with the Yakult Swallows in the Japan's Central League.  Ray played two years overseas and retired.  He finished his career with a .290 batting average, a 101 OPS+, and 20.6 WAR over ten major league seasons. 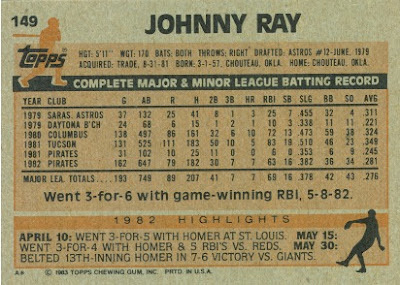 Flipside:  You can see Ray had some very impressive minor league stats.  Not sure why he was never brought up by Houston in '80 or '81.  Perhaps they were hoping for him to refine his defense.  At least Houston had Bill Doran a year behind Ray, so it's not like second base was a black hole for the Astros after the trade.
Oddball: As if the name Johnny Ray isn't cool enough, his middle name is Cornelius.
History:  Ray had a nice career but began to decline defensively once he hit his 30's.  He never hit below .274 in a full season and finished his career with more walks than strikeouts (353/329).  The 1980's had plenty of good players at second base so it was somewhat easy to overlook Ray with the likes of Ryne Sandberg, Steve Sax, Juan Samuel, Lou Whitaker, Willie Randolph, and Frank White around at the same time.
Posted by Brandon at 7:09 PM