Although Miguel Dilone had played in parts of nine seasons this is just his fifth Topps card.  Like Ernie Whitt in the prior post, Dilone had a four player rookie card in the '78 set.  Unlike Whitt's card, Dilone was surrounded by lesser known players Clint Hurdle, Willie Norwood, and Dave Bergman.  This card breaks a streak of sorts since the last ten positional players have been shown in the batters box during game action.  Usually when a batter wears one batting glove they wear it on the bottom hand.  The switch hitting Dilone is posing with a left-handed swing, but I'd bet he was swinging right-handed in practice before this picture. 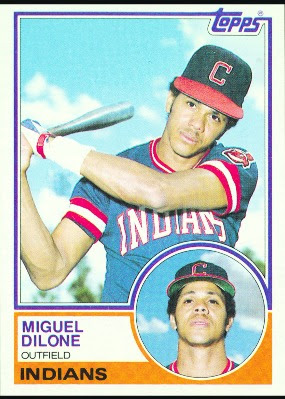 Player: 17 year-old Miguel Dilone signed with the Pittsburgh Pirates in 1972 and two years later after a dynamite year at A-ball (.414 OBP, 85 SB) he was called up to the parent team at the tail end of '74.  Dilone played in 12 games mainly as a pinch-runner.

The next two years Dilone was a September call up, but other than stealing a few bases, made little impact.  He made the Pirates opening day roster in '77 but hit poorly and was shuttled back to the minors. He made his annual September appearance but ended the year hitting .136 in 44 at bats.

The Pirates, not sure if Dilone would ever amount to anything other a pinch-runner, traded the speedster to the A's before the start of the '78 season.  Oakland gave him a chance as their starting left fielder but was benched after five weeks.  He was used often as a pinch runner and got a few starts a week batting an unimpressive .229/.294/.271 in 292 plate appearances.  The A's were enamored with his speed and ran him often as he stole 50 bases but was thrown out a league high 23 times.

Dilone got another opportunity in the starting lineup but it didn't work out and he was jettisoned to the Cubs in July.  Chicago used him primarily as a pinch-runner and he ended the year batting .220 in 137 plate appearances.

Dilone started the 1980 season at AAA and was sold to the Indians in May.  Cleveland plugged Dilone into the lineup and he responded with seven multi-hit games in his first ten games.  The hits kept falling and the Indians found room for him playing him in all three outfield spots as well as DH.  Dilone hit a surprising .341 in 566 plate appearances with 65 stolen bases.  Dilone started the '81 season slow but gradually heated up enough to hit .290 with 29 stolen bases.

The slap hitting Dilone again got off to a poor start in 1982. Then as he heated up he hit three home runs in a five week span.  After hitting just two prior home runs in his career, Dilone's swing got longer as he was swinging for the fences and fell into a slump.  He lost his starting job and batted .235 with 33 steals.  Never a strong defender despite his speed, he made nine errors in just 97 games in the outfield.

The 1983 season would see Dilone start the year on the Indians bench.  He did little to earn more playing time and was traded twice in September, first to the White Sox and a week later to Pittsburgh.  The strange year ended with a .183 average in just 81 trips to the plate. 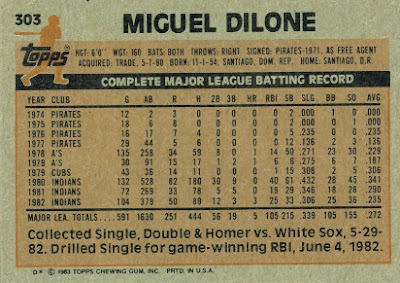 Flipside:  That '80 season is quite an outlier. It was his only season where Dilone played enough to qualify for a batting title and he finished 3rd in the AL.  I wonder how many players have had one qualifying season and hit for as high an average?

Oddball: Three games at thirdbase in 1978 in Dilone's fielding register really stand out.  A's manager Jack McKeon loved using pinch runners and pinch hitters late in games. Twice in blowouts he put Dilone at the hot corner after he got in the game late.  Then in an August 22 game, McKeon played all his cards trying to beat Earl Weaver and the Orioles.
The O's were up 4-0 after two innings and the A's scratched out single runs in the third and fifth.  McKeon started pushing the buttons in the seventh and got another run on a sac fly when he used a pinch hitter and two pinch runners in the inning including Dilone.  Now down 4-3 in the bottom of the eighth, A's thirdbaseman Taylor Duncan hit a one out single.  McKeon then tabbed pitcher Rick Langford to run for Duncan who scored after a pair of singles.  Outfielder Tony Armas replaced Langford and went to leftfield with Dilone to third.  Now tied at four runs a piece both teams threatened to score but came up empty in the ninth.  McKeon even used another pitcher as a pinch runner when he put in John Henry Johnson to run for Rico Carty.
In the top of the tenth with one out Doug DeCinces hit a grounder to Dilone who booted it and then threw it away for a double error.  Following an intentional walk and groundout, Rick Dempsey plated both runners with a double and the O's held on to win 6-4.
McKeon used four pinch runners, two pinch hitters and two defensive subs trying to win this game.  I'm sure his frenetic use of the bench gave him an edge in some games but it bit him in the butt here.

History:  Dilone was an ultra-aggressive baserunner who was successful in 77% of his steal attempts. But he was a one tool player who had seemed to rescue his career with a shocking season in 1980.  Looking back, his batting average on balls in play that year was .371 which was 115 points higher than any season prior.
Dilone lost his left eye a few years ago while coaching youth baseball in the Dominican Republic when a ball ricocheted off a fence and struck him in the face.