I don't remember John Tudor with facial hair but here he is with a red mustache on his third Topps card.  With the mustache he looks like the guy who fills the vending machines where I work.  It seems like they could have arranged the picture better and not cut off his right foot.  Although if they center Tudor it might look like he's sitting on the circular cameo frame, so maybe not. 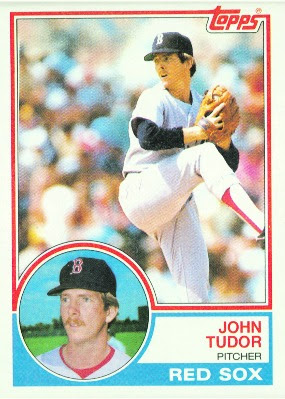 Player: John Tudor wasn't a highly touted prospect as he worked his way through the minors, which would make his eventual success that much sweeter.  He was a 3rd round pick in the January draft in '76 and despite ERA's below 3.50 he was a swingman his first three years in the minors.  He was given a permanent spot in the Pawtucket rotation in '79 and pitched very well earning a promotion in August.  He made six spot starts for the Red Sox but wasn't effective.

Tudor started the 1980 season in Pawtucket's rotation but was recalled mid-year and made 13 starts for Boston with an 8-5 record and 3.02 ERA.  The next season was not as good as he struggled with a 4.56 ERA and ended the year in the bullpen.  He was solid the next two years winning 13 games in both '82 and '83.  His detractors noted his game to game inconsistencies while his supporters appreciated his gutsy competitive spirit.  The Red Sox had two other lefty starters in Bruce Hurst and Bob Ojeda, and Tudor was shipped to Pittsburgh in return for Mike Easler.

Tudor performed well in Pittsburgh although he suffered from lack of support.  Still he finished with a 12-11 record and 3.27 for a last place team.  Seeking to add some punch to their lineup the Pirates sent Tudor to St. Louis in the George Hendrick deal.

The soft tossing port-sider began the '85 season slowly with just one win in the first two months of the season.  When Tudor made his 12th start on June 8 he was 2-7 with a 3.73 ERA.  The southpaw then went on a tremendous stretch that lasted the rest of the year.  Over his last 25 starts he went 19-1, with a 1.32 ERA and 10 shutouts.  His shutouts total and 0.938 WHIP led the National League and while 21 wins and a 1.93 ERA usually equal a Cy Young award, Doc Gooden's amazing season topped him.

Tudor pitched fairly well in the NLCS going 1-1 with four earned runs in 12.1 frames and dazzled allowing just a single run allowed in Game 1 shutting out KC in Game 4 of the World Series. The Cards had to be confident with their ace on the hill for Game 7.  Tudor had been pitching in pain since his rookie year and including the postseason had logged over 300 innings.  It all seemed to catch up with him at the worst time as his usual pinpoint control was nowhere to be found and he failed to make it past the third inning as the Royals won the game and the Series.

His left shoulder would continue to give him trouble in '86 and really the rest of his career. With a fastball in the low 80's he had little margin for error but he was still productive with 13 wins and a 2.92 ERA but his shoulder problems shut him down in September.

Tudor's shoulder was operated on in the offseason and he was ready to go on opening day.  After three starts he suffered a broken leg when Mets catcher Barry Lyons flew into the dugout chasing a foul ball and crashed into him.  Tudor returned in August and pitched well down the stretch.  The Cards were careful not to push Tudor as he only went as far as eight innings once and he went 6-0 over his last eight starts with a 2.79 ERA.  He pitched well in the postseason until he was shelled for 6 runs in the Game 6 loss to the Twins in the World Series.

Coming off knee surgery, Tudor missed the first three weeks of the '88 season but excelled upon his return.  St. Louis was way out of the race in August and traded Tudor to the Dodgers for Pedro Guerrero.  Tudor continued to get batters out for the Dodgers and won 10 games with a 2.32 ERA on the season.  After one so-so start in the NLCS, Tudor took the mound for Game 3 of the '88 World Series against the Dodgers but lasted just one and a third innings as he left with a elbow pain.

Tudor was repaired in the offseason getting Tommy John surgery on his elbow, frayed cartilage from his shoulder removed, as well as some screws removed from his knee.  He pitched in just six games in '89 and returned to St. Louis in 1990.  His fastball now topped out at 80 but the bionic pitcher located extremely well and went 12-4 with a 2.40 ERA in 146 innings.  Tudor retired after the season with a 117-72 record and 3.12 ERA. 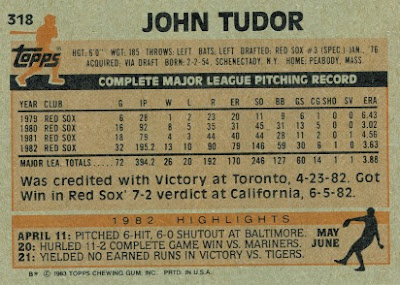 Flipside:  By ERA his '79 trial and '81 season were by far his worst.  After a 4.06 mark in '83 he ERA would never again break four.  His ERA+ from '82 through the rest of his career was 127.
Oddball:  Tudor and his mates on the '84 Pirates led the Senior Circuit with a 3.11 ERA and allowed just 567 runs.  Their meager offense scored 615 which on paper should equal 87 wins according to their Pythag record.  The Bucs somehow won just 75 and finished in dead last in the NL East.
History: Tudor won over 13 games just twice and received votes in CY voting just one time but was as good a pitcher as anybody in the National League when he was healthy.  His '85 season was truly amazing and he did it all without a blazing fastball or trick pitch. Whitey Herzog summed him up pretty well when he said:

“Nobody ever did more with less.... John won me 64 ballgames and only lost 27 [actually 62-26] between 1985 and 1990, a record that still leaves me shaking my head, considering the stuff he had. Well, when you can’t crack eighty-five on the radar gun, maybe a foul mood and a chip on your shoulder are just the right ticket. They sure didn’t hurt John.”

Tudor himself had a dry, straightforward wit and always seemed to speak honestly about his performance had this to say during his last season:


“My changeup is getting faster, which is a bad sign, because it means my shoulder isn’t allowing the proper deceleration. It was as if I was getting by on reputation. I haven’t been able to get the ball inside, so I don’t have anything to keep hitters from diving on me. I haven’t thrown a slider all season. I’m not getting the proper extension at the end of my delivery, so not only am I not getting the pop on my fastball, but I don’t have my control. . . I have all these doubts storming inside me, and they all revolve around that 78-mile-an-hour fastball.”