Not only is this Gary Rajsich's rookie card, it's his only Topps card.  Looks like this picture of Rajsich breaking out of the box was taken when the Giants visited Shea Stadium.  Because he only played one day game against the Giants I'm pretty sure this picture was taken on May 9, 1982.  He batted three times in the game with a fly out to center, a ground out to first, and a single to right.  Judging by where Rajsich is looking I'd say were are looking at either the ground out or the single. 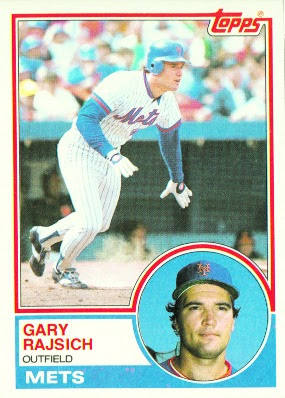 Player: Gary Rajsich went the baseball machine known as Arizona State which produced no less than 49 major league players in the 70s and 80s.  He was an 11th round pick of the Astros in 1976 and had a slow start to his pro career hitting for neither power or average his first three years.  He broke through with 20 home runs between two levels in '79 and was a minor league stud at AAA Tucson in 1980 batting .321/.435/.575 with 14 triples, 21 HR, 99 RBI, and 12 steals.

At age 26 Rajsich wasn't exactly a blue chip prospect and the Astros traded him to the Mets for another minor leaguer with an even stranger name: John Csefalvay.  Rajsich took advantage of his fresh start at AAA Tidewater and crushed homers at an amazing clip.  He was on the Mets radar but with Dave Kingman, Lee Mazzilli, and Rusty Staub they had a glut of leftfielder / first base types.  With 24 home runs in 78 games and 288 plate appearances, Rajsich's season was ended by a broken wrist, otherwise he surely would have been a September call up.

Rajsich made the Mets opening day squad in '82 as a reserve and spent the year as a pinch-hitter finding playing time scarce until the last month of the season.  He struggled in the unfamiliar bench role and hit just a pair of homers while batting .256 in 162 at bats.

He spent most of '83 back at Tidewater waiting until rosters expanded before getting another chance.  He hit .333/.400/.500 in 40 plate appearances with only one strikeout which was  a major improvement since he K'd about 25% of the time in '82.

Rajsich was sold to the Cardinals as rosters were taking shape in April of '84 but spent all but seven at bats at AAA Louisville where he clubbed 29 homers.  In the offseason he and three other Cards were sent to San Francisco in exchange for Jack Clark.  The Giants used him as a pinch-hitter and part time first baseman but he again struggled when he wasn't in the starting lineup.  He batted just .165 in 110 plate appearances and was demoted in July.  The Cards purchased his contract and he finished the year back at Louisville.  He spent the next three years playing in Japan for the Chunichi Dragons before retiring. 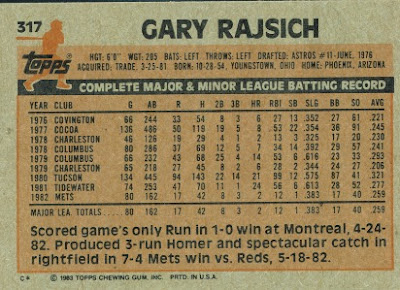 Flipside: You can see from the numbers that Rajsich really improved after his first three years in the minors.  He credits the purchase of a $1,200 pitching machine after the '78 season for turning his career around.  He practiced relentlessly, with his wife feeding the machine and Rajsich hitting 400 pitches a day, taking heed from the Ted William adage that "the only way to learn how to hit, is to hit".

Oddball: There is saying that pinch hitting is one of the hardest things to do in sports.  You would get no argument from Rajsich, who was a mere 4 for 64 as a pinch hitter.  The rest of the time he was 70 for 232, a .302 average.

History:  Rajsich had a brief major league career with a career line of .236/.328/.345 in 149 games.  Perhaps he would have been off as a DH in the American League, but with a poor track record of pinch hitting, it's hard to say.  He has had a much better career as a scout, signing Jon Lester for the Red Sox.  Rajsich was named the Orioles director of amateur scouting in 2011.
Posted by Brandon at 12:03 PM