Thanks for checking back in.  I've been busy managing four and half foot tall ballplayers rather than writing about the older guys on cardboard but I plan on posting more regularly when I can.
Garth Iorg looks like he's playing 2nd base in this photo and checking out some action on the left side of the infield. I don't remember him with a mustache but he wears it well here in classic early 80's fashion.  The light blue and purple borders are an excellent fit for the Blue Jay cards in this set.
The pronunciation of his last name was a mystery to me as an eight year old.  I think I incorrectly called him eye-org for at least a year.  "ORJ" is the correct way to say his name. 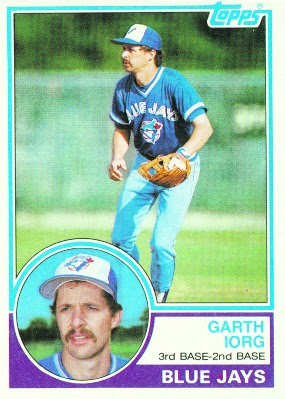 Player: Garth Iorg was an 8th round pick of the Yankees in 1973 but never played in the majors for New York.  Although he hadn't yet reached AAA he was on the Blue Jays radar and was selected in the '76 expansion draft as Toronto prepared for their first season.  He spent all of '77 at AAA and made the team in '78.  He hit very little with the big team and after a month of hitting under .200 he was sent back to the minors where he would remain for nearly two years.

A hot start at AAA Syracuse got him back to the majors in May of 1980 and he would remain with Toronto the rest of his career.  He filled a utility role for the Jays the next two years playing everywhere but rightfield, catcher, and pitcher.  Statistically his first two years were both similar and unimpressive.  He came to the plate about 230 times in both '80 and '81 and hit .248 and .242 with little power and few walks.

In '82 Iorg found a role as a platoon partner at thirdbase with fellow infielder Rance Mulliniks.  Iorg also saw time at secondbase, DH, and was a frequent pinch hitter batting .285 in 442 plate appearances.  A righthanded hitter, Iorg complimented Mulliniks' lefty stick and the  Jays used the
arrangement for the next five years.  Iorg hit .275 in '83 and fell off to .227 in '84.

1985 would be Iorg's finest season in many respects.  He set career highs in all three slash stats (.313/.358/.469) and home runs with seven.  His OPS+ of 121 would be the only time he topped 100 in his career.  He had just two hits in the ALCS against Kansas City but was able to play against his brother Dane an OF/1B for the Royals. 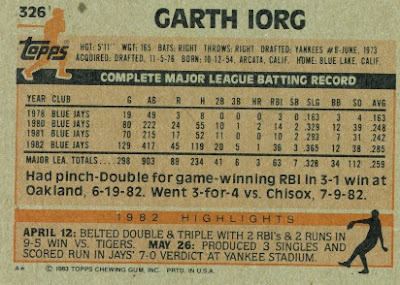 Flipside: Twelve base on balls is a ridiculously low total for how many times Iorg batted in '82. He only walked 114 times in his career.
According to his Wikipedia page Iorg's hometown of Blue Lake named it's  only baseball field in Iorg's honor.

Oddball:  In the 1980s Iorg and Mulliniks were often referred to as a successful platoon duo but Iorg didn't really live up to his end of the deal.  While Mulliniks posted seven seasons with an OPS+ over 100, Iorg had just one.  Looking solely at how Iorg hit lefties, his .268/.304/.373 still leaves a lot to be desired.

History:  Iorg found his niche in majors as a platoon player, which is a vanishing role these days. With 12 and 13 man pitching staffs, teams just don't have the depth the platoon much anymore.  Iorg's last at bat in the majors came in game 162 of the '87 season.  He grounded out to pitcher Frank Tanana as the Blue Jays lost to the Tigers, capping Toronto's last month collapse.   Iorg has three sons in minor league baseball.  Iorg currently is the Brewers first base coach.
Posted by Brandon at 2:38 PM