Where is Bobby Castillo pitching?  Hard to tell from this fuzzy ambiguous background.  I will say, Castillo's mustache probably deserves its own card.  Castillo's 4th Topps card shows him in the powder blue uniform / navy blue hat in the action shot and the white uni / red hat combo in the inset. 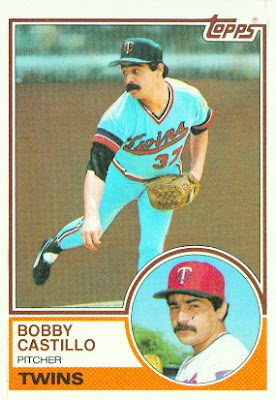 Player: Bobby Castillo was a 5th round pick of the Royals in 1974 and spent his rookie ball season as a thirdbaseman hitting .253.  He worked the next several years in the Mexican Leagues learning to pitch, and while he was south of the border he was sold to the Dodgers.  During the '77 season he came back to the states and made his major league debut in September.  He pitched 11 innings and allowed 5 runs winning his only decision.

The 5'10" righty split the '78 season between LA and Albuquerque.  While in the majors Castillo logged 34 innings, all in relief, and was 0-4 with one save and a 3.97 ERA.  He spent most of '79 in the minors and had to wait until August for a promotion.  Once back in his hometown of LA he was effective with a 1.13 ERA in 24 innings.  Castillo was trusted with some late inning work and saved 7 games in 7 opportunities.

Castillo would have his best season in 1980 tossing 98 innings in 61 games with a 1.169 WHIP and 2.75 ERA.  His biggest contribution to the Dodgers may have been over the winter when he showed 19 year-old rookie Fernando Valenzuela how to throw the screwball.  The next season was a let down as his ERA ballooned over five in 50 innings of work.  He pitched one inning in each the NLCS and World Series as the Dodgers won it all.

During the offseason the Dodgers sent Castillo packing to the Twins in a four player deal.  He began the year in middle relief but after some injuries to Twins starters he was pushed into the rotation at the end of May.  Despite not having made a start since 1977, he thrived in his new role and logged 218 innings with a 3.66 ERA.  He finished strong with six complete games in the last two months including a four-hit shutout over the Royals on September 10.

Injuries and ineffectiveness led to a poor showing in '83 as he posted a 4.77 ERA in 158 frames.  A shoulder injury forced his '84 debut until July.  Pitching mainly out of the pen he was productive (1.78 ERA) in 25 innings but walked 19 batters.

After the '84 season he was signed by the Dodgers where he spent the '85 season in middle relief.  His control continued to trouble him as he issued 41 freebies in 68 innings which helps explain his 5.43 ERA.  Castillo was cut from the Dodgers the next spring training and returned to pitch in Mexico.  Comeback attempts with the A's and Mariners failed and he spent the '87 season plying his trade in Japan for the Chunichi Dragons. 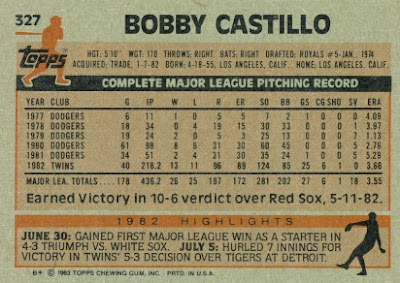 Flipside:  I'm not sure I've mentioned this before but it's somewhat perplexing that Topps lists inning fractions in the most recent season and career totals but not the other seasons.  Beginning in '77 Castillo threw 11.1, 34, 24.1, 98.1, 50.2, and then 218.2.  You can see that Topps rounds one-third of an inning down and two-thirds up which makes sense.  The career total isn't correct in that he actually tossed 437.1 innings at this point in his career.  The 436.2 total merely reflects Topps rounding efforts in his first five years plus his precise '82 total.

Oddball: Castillo's last game in the majors was in mop up duty in Game 4 of the '85 NLCS.  The Dodgers were up two games to one but the Cardinals jumped all over starter Jerry Reuss in the second inning.  The Redbirds plated nine off of Reuss and reliever Rick Honeycutt who faced four batters but failed to record an out.  Castillo came in with two outs in the second and pitched the next five and a third innings allowing two runs.  The totality of the onslaught was too much for the Dodgers to overcome as they lost 12-2 and the series in six games.

History:  Castillo had one really good season as a reliever and one as a starter in his career.  His career line indicates a 38-40 win-loss record, 18 saves, a 3.94 ERA (100 ERA+), 689 innings pitched in nine seasons of play.  Since retiring as a player, Castillo has been active in promoting Mexican-American baseball history and supporting inner-city youth participation in baseball.
Posted by Brandon at 9:18 AM