Randy Niemann is a poser.  Well, he is.  He is pictured on his third Topps card in the dreaded empty fist in overhead glove.  By the look of the inset picture Niemann feels pretty bad about the sham.
At least we get a good look at Willie Stargell's stars on Niemann's pillbox hat. 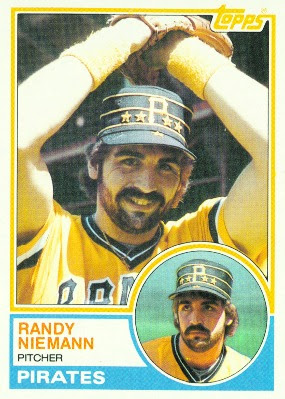 Player: Randy Niemann's pro career started when he was drafted by the Yankees in the June secondary draft in 1975.  After two and a half years in the Yankees system he was sent to the Astros as part of the Cliff Johnson trade.  After a few more years in the minors, Niemann debuted with Houston in May of 1979.  He had an impressive start to his career with two shutouts and another complete game win in his first seven games.  Nonetheless he shuttled back and forth between the pen and rotation. After his second shutout he made only two more starts but neither lasted past the fourth inning.  Niemann appeared in 26 games with a 3.76 ERA and 1.343 WHIP in 67 innings.

Niemann spent the beginning and end of the season in Houston with a sojourn to AAA Tucson in the middle.  With the Astros he was  used in middle relief with one start.  In 33 frames he posted a lackluster 5.45  ERA.  He spent all of '81 back in Tucson before he was dealt to Pittsburgh in the Johnny Ray / Phil Garner trade.

After starting the '82 season at AAA Portland, Niemann was called up to Pittsburgh where he served as the teams mop up man with a 5.09 ERA in 35 innings.  He spent all but eight games back in Portland and failed to impress the big league Pirates with an ugly 9.22 ERA. The Bucs traded Niemann to the White Sox in September but he pitched in just five games for Chicago in '84.

Niemann was traded to the Mets at the end of spring training in '85.  He pitched very well as a swingman for Tidewater with a 2.76 ERA in 159 innings.  He pitched 4.2 scoreless frames for the Mets in September call-up.  The AAA success along with the scoreless fall set up Niemann for a role on the '86 team.  He spent all but a few weeks in the Mets bullpen and although he was often used in low leverage situations he was able to hang around for the championship season.  He pitched in 31 games with a 3.76 ERA and the highlight was a spot start win over the Cardinals on 8/17.  Although on the roster, he did not play at all in the postseason.

The big lefty signed with Minnesota but pitched in just six games for the Twins as a situational reliever.  The Twins won the World Series but Niemann was nowhere near the action this time. He returned to the Mets organization in '88 but struggled through 10 rough innings back at Tidewater and retired. 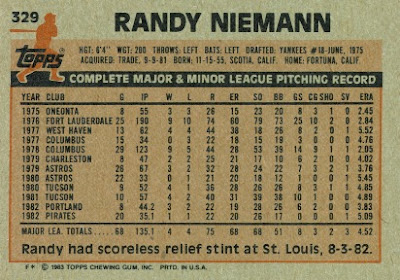 Oddball: When the Mets traded for Niemann they gave up minor leaguers Ken Reed and Gene Autry!  As far as I can tell this Gene Autry was not related to the singing cowboy who can claim to be the only person with five Hollywood stars.

History: Niemann was on some great teams but as a spare reliever he never pitched in the postseason.  His pitched exactly 200 innings in the big leagues with a 4.64 ERA and allowed just over a runner and a half per inning.
Posted by Brandon at 3:59 PM