Jerry White's 7th Topps card shows him following through with a right handed swing.  White's hair poofs out of his wrinkled up Expos hat in the inset. 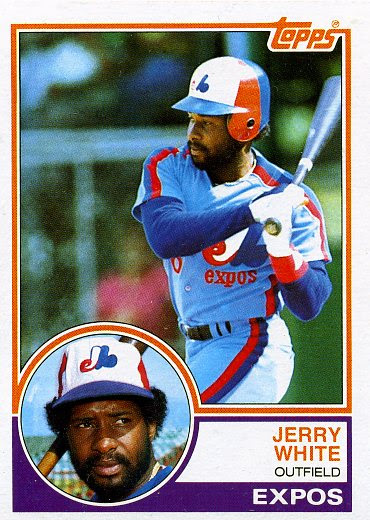 ﻿
Player:  Jerry White was a reserve switch-hitting outfielder and pinch hitter for 11 seasons in the major leagues.  White was drafted by the Expos in 1970 and had a 4 for 10 debut in a September 1974 look-see. This may have helped his cause in making the 1975 squad but he batted just six times in the first two months as he was primarily used as a pinch runner.  He was sent back to AAA but hit .319 in September (29/91) when he was called back up to the majors.
White was the Expos starting CF for the first half of the '76 season but finished the year as a pinch-hitter and occasional leftfielder.  He batted .245 in 278 at bats with 15 steals and 2 HR.  He barely played in '77 and wasn't playing much when he was dealt to the Cubs in June '78.  White hit .278 with Chicago but was traded back to the Expos after the season. 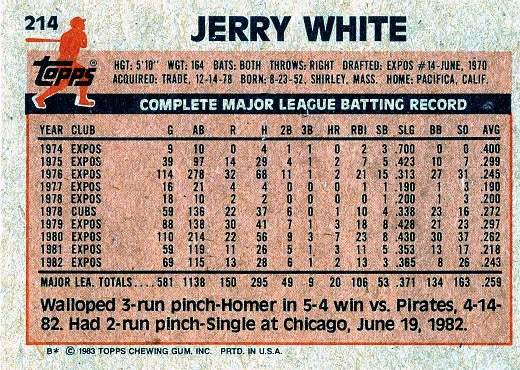 Flipside:  I found this scan of White's card and used it because of it's brightness.  You can see from his year to year totals that White was never a regular although he started most of the first half for the Expos in '76.
Oddball:  White, now a first base coach for the Twins, got quite a scare on June 8 of this year.  Check him out at the 1:30-1:45 mark of this video.
White is so startled by the thunder strike he takes cover behind the first base umpire!
White hit .408 (42/103)  against the Cubs in his career, .105 points higher than any other team he faced.
History:  White spent most of his career with the Expos who had no shortage of outfield talent during the late 70's and early 80's.  It is easy to see why White played a reserve role with Montreal as they had Andre Dawson, Ellis Valentine, Ron LeFlore, Warren Cromartie and Tim Raines during his tenure.
White's career highlight has to be his role in the '81 NLCS. He started all five games for the Expos, had five hits in 16 at bats including a double and home run.  Manager Jim Fanning chose White as a starter over a young Tim Wallach and Terry Francona.  White's three run homer in Game 3 was the deciding blow and provided the Expos only long ball in the entire series.  Although White played well the Expos lost to the eventual World Series champion Dodgers.