This is the 8th Topps card of Roy Howell's career.  Any guesses as to what team that is in the dugout?  Angels maybe?
The 3rd BASE designation on his card is not accurate. Howell didn't play third at all in '82 and '83. 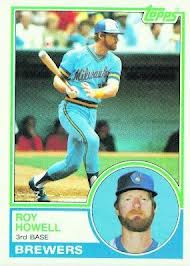 Player: Roy Howell was a left handed hitting third baseman and DH for 11 seasons in the big leagues.  He broke in with Texas in 1974 and the former first round pick batted .250 in 44 at bats during his rookie year.  Howell, who hit 22 HR as a 20 year-old in AAA in '74, earned the starting job at the hot corner for the Rangers in '75.  He never lived up to expect-ations though as he failed to hit over .253 or more than 10 HR in either '75 or '76.
Howell started the '77 season on the bench and after an 0-17 start he was traded to the expansion Blue Jays.  Howell was playing everyday for Toronto and although he missed a month due to injury, he hit .316 in 412 plate appearances.  Manning the hot corner for the next three years, Howell hit .270, .247, and .269 with 8, 15, and 10 HR respectively over the '78-'80 seasons.
He signed a free agent deal with the Brewers prior to the '81 season.  Howell struggled with injuries and hit just .238 in his first year in Milwaukee.  In '82 with Paul Molitor now playing third base, Howell served as the left-handed hitting platoon partner with another displaced third sacker, Don Money.  Howell hit .260/.305/.350 in 98 games but was one of the easier outs in a loaded lineup.  Howell was hitless in 14 postseason at bats as the Brew Crew bowed out to the Cardinals in the World Series.
Howell was productive in '83 with a .278/.330/.448 line in 211 plate appearances.  With Molitor injured for most of '84, Howell had a chance to regain his old job back but his performance did little to suggest he was up to the task.  Howell's numbers slipped to .232/.284/.348 and he was rusty with the glove, fielding just .907 at third.
Released by the Brewers after the '84 season, Howell tried to jump start his career with the Giants but was cut in spring training.  He spent the '85 season at the Phillies AAA affiliate before retiring.  Howell hit .261/.321/.389 in 11 seasons with 80 career homers. 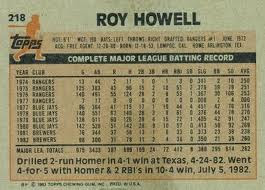 Flipside: Wax stain and fuzzy numbers.
Strangely Howell hit nine triples but had zero steals in 1980.  Usually a player fast enough to leg out that many triples is fast enough to steal a few bases.  Not Howell though, he swiped only nine bags his entire career and must have been hitting a lot of liners to the gaps.

Oddball: Howell, like many players who played in the 70's and 80's, went through various looks and hair styles.  On his '83 card he had short hair and a trimmed beard.  Below you can him as a young bespectacled Ranger, a bearded Jay, a clean-shaven Brewer, and how he appeared in 2008:

History:   Howell's two claims to fame are his time with the new Toronto fanchise and his spot on the pennant winning Brewers.  His 1978 season with the Blue Jays earned him an appearance in the All-Star game where he grounded out against Steve Rogers in his only at bat.
Looking back at his career, Howell didn't really excel in one particular area. His left handed bat and ability to play third made him a commodity and he parlayed that into a decent career.
Posted by Brandon at 9:39 PM