This Mike Armstrong card always gives me the "willies" when I see it.  I don't know Armstrong, can't find anything negative about the guy's character, but he looks like a creeper on this card.  Also Topps got lazy and used a head shot from the same photo session and background.  Double creepy.

I had this big write up planned on how Armstrong reminded me of Milton from the movie Office Space but apparently I'm not the first to make that comparison.
Anyway here is his 2nd Topps card, with what looks like Tiger Stadium rafters in the background. 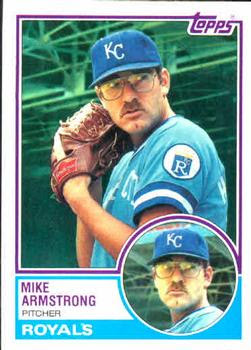 Player:  Mike Armstrong came up through the Reds system but was traded to the Padres before he reached the majors.  He appeared in 11 games in '80 and 10 more in '82 with San Diego but was wild and ineffective.  Armstrong got his break when he was sold to the Royals right before the '82 campaign.
After beginning the season in the minors for the ninth straight year, Armstrong was called up in May.  Used mainly in long relief, he gradually was trusted in more crucial spots and was soon bridging the gap to ace reliever Dan Quisenberry.  The Royals used Armstrong in copious doses and he lived up to his last name.  In one stretch he pitched 25 innings in a 17 day period and pitched well.  By the end of the year, he had recorded six saves while logged 112 innings with a 3.20 ERA.
The side-slinging Armstrong was used in more short relief situations in '83 but still worked over 100 innings notching 10 wins with a 3.80 ERA.  The Royals traded Armstrong while his value was at its peak and fetched Steve Balboni from the Yankees in return.
The heavy workload caught up with Armstrong and he was not the same in New York.  He spent the first half of '84 on the DL nursing a sore elbow and didn't appear in pinstripes until June.  The season wasn't an entire waste as pitched in 36 games with a 3.48 ERA.
Armstrong had a disappointing spring training in '85 and he never regained the trust of Yankee management.  He was up and down several times over the next two seasons but pitched just 23.1 innings with the Yanks.  He was released from AAA Columbus in April of '87 and was signed by the Indians.  Armstrong was brutalized for 18 runs over 18.2 frames before Cleveland stopped the terror and sent him to the minors.  Armstrong never made it back and his career was over.
Stuff:  85-87 mph fastball, slider 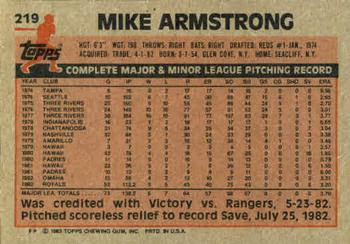 Flipside:  At first glance the back of this card has the look of a long time veteran.  Instead it is the winding travels of a journeyman reliever.  Armstrong had a lot of stops along the way to the majors.  Including his later work, he played in 12 different minor league cities.
Oddball:  Armstrong was the winning pitcher in the famous Pine Tar Game.
History:  Armstrong pitched eight seasons in the majors but 215 of his 338 career innings came in a two year stretch for the Royals.  Strange how it took until he was 28 years old to establish himself, but was damaged goods by the time he was 30.  ﻿