This is Mario Soto's fifth Topps card and it shows him as I remember him- with an intense look on his face.  The inset shows the same fiery stare.  Hot pink border- Yikes!

Player: Mario Soto was a fireballer with an outstanding changeup who spent his whole major league career with the Reds.  He was signed by Cincinnati in '73 and after some impressive minor league seasons was called up in 1977.  He had trouble keeping the ball in the yard allowing 12 homers in 60 innings and posted a 5.34 ERA.
Soto spent most of '78 in the minors, but did well in a September call up with a 2.50 ERA in 18 frames.  The Reds converted Soto to a reliever in '79 and he began the year at AAA.  He was recalled mid year and appeared in 25 games with an ERA of 5.30.  The next year he pitched mainly in long relief but also made 12 starts.  Overall it was a very good year as Soto logged 190 innings, struck out 182, with a 3.07 ERA.  His production earned him a fifth place spot in Cy Young voting.
In the strike shortened '81 season, Soto won 12 in an NL best 25 starts, completing 10 of them.  He K'd 151 in 174 innings with a 3.29 ERA.  Soto was a workhorse over the '82 and '83 seasons, logging 531 innings with 31 complete games.  He was as dominant as any NL hurler, striking out 516 batters with an ERA in the 2.70s both years
Soto was again durable in '84 and '85 seasons and his performance slipped just slightly.  He won a career best 18 games in '84 and posted an ERA of 3.53 and followed it with a 3.58 mark in '85.
He never really was healthy again as he struggled through the next three years making just 39 combined starts with little effectiveness.  The Reds released Soto during the '88 season and he pitched one inning for the Dodgers at the single-A level before calling it quits.  Soto retired at age 32 with 100 career wins, a 3.47 ERA (108 ERA+), and 24.6 WAR in 12 seasons.
Stuff:  Fastball (90-95), circle change, occasional slider 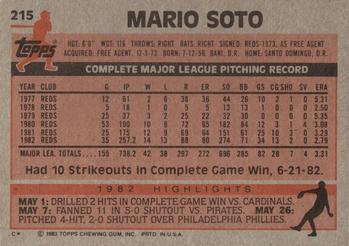 Oddball:  Soto had a noted temper and was suspended twice during the '84 season. The incidents are best detailed here.

History:  Soto's career ended too soon and he is often forgotten outside of Cincinnati.  His only postseason action was two scoreless relief innings in the '79 NLCS.  He received Cy Young votes four different years and was a three time All-Star.
Soto has stayed involved with the Reds in various capacities and currently works in their front office.