Lenn or Lenny?  My memory tells me that he was usually referred to as Lenny but I can't be certain.  Either way this is Sakata's 4th Topps card and is somewhat unique in that you can only see his face in the inset picture. 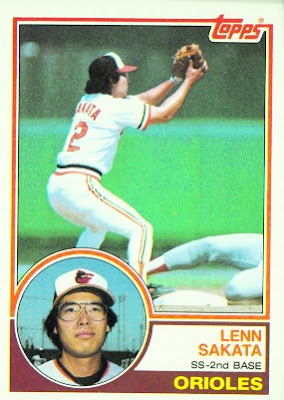 Player:  Lenn Sakata was drafted twice before but did not want to leave Gonzaga University until the Brewers drafted him in the January draft in 1975.  He was hitting over .300 at AAA Spokane when he was called up in July of 1977.  The Hawaiian second baseman struggled with the promotion and batted just .162 in 53 games.  Stuck behind Brewer infielders Robin Yount, Paul Molitor, Jim Gantner, and Don Money, Sakata spent most of the next two years back at AAA getting just 78 at bats in '78 and 14 in '79.

The Orioles came calling in December of '79 acquiring Sakata for John Flinn.  The O's sent him to AAA Rochester to start the 1980 season but after he hit .344/.396/.399 in the first month he was called up to Baltimore.  He played secondbase and some shortstop but hit just .193 in a reserve role.

One knock on Lenny had been his lack of power so he worked out diligently on the nautilus machine and improved his strength.  According to Daniel Okrent in his book Nine Innings:  "Standing next to a taller teammate, like the elongated Jim Palmer, Sakata’s overdeveloped chest and shoulders gave him the appearance of a midget wrestler".  Sakata continued as a sub batting .227 and clubbed five homers in 150 at bats in '81.

Sakata began 1982 as the Orioles starting shortstop and held the position until Cal Ripken slid over from thirdbase midyear.  Sakata still received a lot of playing time after the switch either as a defensive sub for Rich Dauer at second or starting there a few times a week.  With 389 at bats and 136 games it was by far the busiest season of his MLB career.  He batted .259/.323/.370 with 6 HR and 7 SB.

Sakata continued as a reserve at second base the next three years and continued to play solid defense but hit little with averages of .254, .191, and .227.  His career highlight was not at secondbase or at shortstop but in an 8/24/83 contest against the Blue Jays when he was pressed into duty at catcher.  After both catchers Rick Dempsey and Joe Nolan were out of the game, Sakata took over behind the plate in the top of the tenth in a 3-3 game against the Blue Jays.  Toronto's Cliff Johnson homered off Tim Stoddard to give the Jays a 4-3 lead.  Tippy Martinez came in to pitch for the O's and allowed a single to Barry Bonnell.  Anxious to steal on the fill in backstop, Bonnell was picked off first by Martinez.  Dave Collins walked and then got picked off too.  Willie Upshaw followed with a single and unbelievably was picked off to end the inning with Martinez getting the pick off hat trick.  Now down 4-3, Cal Ripken tied the game with a blast to start the bottom of the 10th.  After a walk-ground out-intentional-walk-strikeout, Sakata came up with two outs and unloaded a three run walk-off homer to end the game.  Sakata was on the roster but played in just one game in the Orioles '83 postseason run.

Now a free agent, Sakata left for Oakland but spent most of '86 at AAA Tacoma where he hit .313.  He was called up in August and went 12 for 34 to end the season.  Sakata again was a free agent and landed in New York.  He played sparingly getting about one start a week at thirdbase before his season ended when an awkward slide tore ligaments in his ankle.  Strangely, Yankee slugger Ron Kittle strained a neck muscle helping Sakata off the field and both ended up on the disabled list. 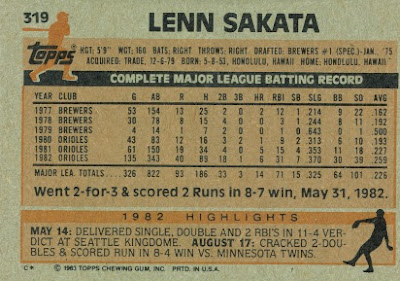 Flipside: Listing Sakata listed at 5'9" is pretty generous since most bio's I've found on him describe him as at least an inch shorter.
Oddball: Sakata was just 7 for 102 (.069) in his career against the White Sox and once went 66 consecutive at bats without a hit against the Pale Hose.  View his triumphant hit here, to break the streak.
History:  Sakata's place in history is usually described as one of the most prominent Asian-American players in baseball.  He hit well at AAA batting .289 in over 2,700 at bats at that level but couldn't carry it over to the next level.  He was a fine defensive player who found his niche with the Orioles and had a decent career for a non-starter.
Posted by Brandon at 1:24 PM