Reds veteran Dan Driessen appears here on his 10th Topps card.  The action picture looks really weird to me, almost as if Driessen was cut out of another shot and placed here.  There would be no reason for that though, the edges of Driessen's uniform just don't look right compared to background. 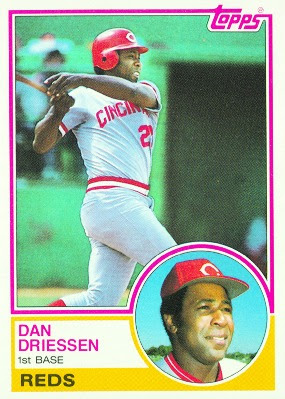 Player:  Dan Driessen went undrafted after high school but was signed by the Reds in 1969 after attending an open tryout.  He was tearing up AAA Indianapolis at a .409 clip in '73 when the Reds called him in June.  Playing at both corner infield spots Driessen hit .301 in 366 at bats and finished third in NL Rookie of the Year voting.  He started three games in the NLCS loss to the Mets, going 2 for 12 along the way.

The left handed Driessen platooned at third base in '74, and was often moved to first base late in games by skipper Sparky Anderson.  When he wasn't starting, Driessen often pinch hit going 5 for 14 in that role.  He produced a stat line of .281/.347/.400 and added 10 steals.  His fielding at the hot corner was poor, a lack of range combined with 24 errors led to him never him playing the position again.

Pete Rose took over at third in '75 and Driessen went to the bench for a two year spell.  These years marked the pinnacle of the Big Red Machine's success as Driessen backed up Tony Perez at first base and George Foster in left field.  Driessen hit .281 and .247 in the '75 and '76 seasons with seven homers each season.  He didn't see much action the '75 postseason, going hitless in two at bats.  He was the starting DH in the '76 World Series against the Yankees and went 5-14 with a homer as the Reds captured a second World Series in a row.

With Perez shipped off to Montreal in '77, Driessen assumed the starting first base position and would hold onto it for the next eight seasons.  In '79 the Reds returned to the playoffs and Driessen batted one for thirteen as they fell to the Pirates. Over the '77-84 seasons he averaged 14 HR a year and hit as high as .300.  A dependable defender at firstbase he led the NL in fielding percentage three times.
Driessen had a good eye and walked in nearly 13% of his plate appearances and led the NL with 93 in 1980.

After a month in a pinch-hitting role with three hits in sixteen tries he was released by the Giants.  He latched onto a minor league deal with the Astros and showed up with the big team in a September call up batting .292 in part time duty.  Driessen wasn't eligible for the playoffs and was released in October.

Driessen spent most of '87 at AAA Louisville and was called up late in the year by the Cardinals.  Filling in for an injured Jack Clark, Driessen hit .233 with a homer and made the playoff roster.  He had three hits in twelve at bats in the NLCS series against the Giants.  The Cardinals then lost a hard fought World Series against the Twins as Driessen had three hits in thirteen at bats.  Driessen retired after the season ending his 15 year career.  His final stats include 153 HR, 154 SB, and a stat line of .267/.356/.411. ﻿ 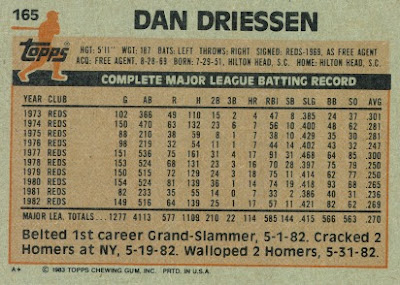 Oddball:  Most defensive metrics show Driessen had sub par range at first base which is odd since he moved well enough to steal as many as 31 bases in '77 and was still reaching double digits in that column as late as '82.

History:  Driessen won two rings with the Reds dynasty and was a regular in Cincinnati's lineup for many years.  He was sometimes maligned for not having the power of most starting first basemen but Driessen was one of those players who did a little bit of everything.
Driessen was recently inducted into the Reds Hall of Fame.﻿
Posted by Brandon at 8:21 PM