This is Jerry Ujdur's second Topps card.  He shared a rookie card with two other Tiger hurlers in the '81 set.  Although he was coming off a ten win season, this would also be his last card.
The pic shows Ujdur (YOU-jer) following through during a spring training game. 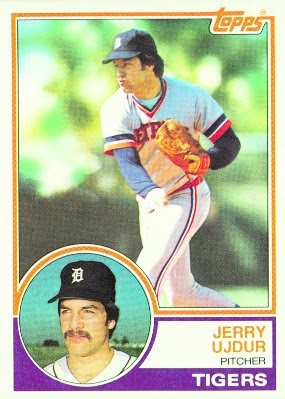 Player: Jerry Ujdur started his pro career with the Detroit Tigers organization after being drafted in the fourth round of the 1978 draft.  Advancing quickly through the Tigers system the former University of Minnesota product debuted in August 1980.  In nine games (two starts) he allowed 20 runs and 46 base runners in 21 innings.  Ujdur got another chance the next year but it wasn’t any easier for the young righty, as he allowed 12 runs in 14 innings.  Adding to his struggles to stay in the big leagues, Ujdur collapsed in the bullpen and was diagnosed with type 1 diabetes.

When the Tigers needed another starter in June '82 Ujdur got the call, and this time he showed much improvement.  He made 25 starts and proved he had a resilient arm by making seven starts on three days rest.  In 178 innings he allowed only 150 hits, a ratio that was second best among AL qualifiers.  He finished the year with a 10-10 record and a 3.69 ERA, 110 ERA+.  Despite his success, Ujdur had trouble with the long ball (29) and his 86/69 strikeout to walk ratio was unimpressive.

The Tigers had big expectations from their staff in ’83.  Ujdur along with Jack Morris, Dan Petry, Dave Rozema, and veteran Milt Wilcox had the makings of a strong starting five.  Ujdur however was unable to hold up his end of the bargain and was sent to the minors after eight rough outings.  He was recalled in September but a few mop up efforts failed to impress.  Ujdur finished the year 0-4 with a 7.15 ERA in 34 frames.

Ujdur was dumped by the Tigers at the end of spring training in '84 and was picked up by the Indians.  He toiled in the minors for most of the season, the fifth time in his career he spent significant time at the AAA level.  He received a look in September but was beat up for 14 runs in 14.1 innings.  Ujdur subsequently retired with a lifetime mark of 12-16 with a 4.78 ERA, 87 ERA+. 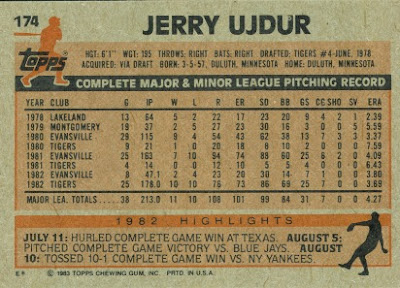 Flipside:  You can see Ujdur had seven complete games in '82 but never pitched a shutout in the big leagues.  He would have if the Tigers would have scored in the first nine innigns of a July 31 contest against the Blue Jays.  Ujdur went nine shutouts innings but Dave Rucker lost it in the 10th. Toronto pitcher Jim Gott went all 10 innings and got the 1-0 win.

Oddball:  Ujdur's first start of '82 came in game two of a June 9 double header against the Indians in Detroit. Ujdur was relieved with one out in the 8th after giving up a two-run homer to Toby Harrah that tied the game at three.  The game would remain locked up through the 15th inning when play was suspended.
The game was resumed September 24 and decided in the 18th when Alan Trammell scored on an Ed Glynn wild pitch.  Both sides used only five pitchers in the marathon contest and Tiger reliever Dave Tobik earned 1.2 Win Probability Added although the win went to Larry Pashnick who retired the only bater he faced.

History:  Ujdur gets lost in my memory of young Tiger pitchers who came up in the 80's.  As a young kid I heard about Ujdur, Dave Rucker, Larry Pashnick, Howard Bailey, and Dave Gumpert and bought the hype.  Somehow none of them ever developed and they all seem muddled into one group of guys who never panned out.
Ujdur had one good season but was unable to keep the momentum he created during his good '82 campaign and he was out of baseball by '85.