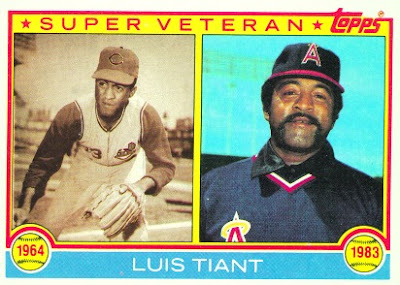 Then and Now:  Tiant was in the midst of a dynamite year at AAA Portland when was called up to Cleveland in July '64.  In '82 Tiant was given a chance to help the Angels during their AL West winning season, but didn't play in the postseason.

Career Span: 7/19/64 - 9/4/82.  As a rookie Tiant played briefly with Al Smith, a Negro League veteran and member of the Indians '54 championship team.  Tiant was on the '82 Angel squad at the same time as rookie Gary Pettis.
Tiant played with Tommy John in '64 and in '82 when the Angels added John as Tiant neared the end.

All Star:  Three time AL All-Star, '68, '74, '76.
Tiant started the 1968 contest and was hung with the loss.  Willie Mays singled off Tiant in the bottom of the first and made his way to third base after an errant pickoff throw and a wild pitch.  After Tiant walked Curt Flood, he coaxed Willie McCovey into double play whiched plated Mays, the only run of the game.
He also took the loss in the '74 All-Star game allowing three runs in two innings in relief of Gaylord Perry.  Tiant pitched two scoreless frames but did not factor in the decision in the '76 contest.

Postseason:  Tiant allowed two runs while retiring two batters mopping up Game 2 of the '70 ALCS as a member of the Twins who were swept in three.
Tiant started and won Game 1  of the '75 ALCS for the Red Sox as they dispatched the favored A's.  He allowed just one unearned run in a complete game effort.
Tiant twirled a gem shutting out the Reds on five hits in Game 1 of the World Series.  Three days later he went the distance, throwing 163 pitches in a 5-4 win in Game 4. Thanks to rainy New England weather, Tiant was able to start Game 6 on five days rest.  He allowed six runs in seven innings in one of the greatest games of all time.  The Red Sox eventually won the game in 12 innings but lost the Series.  This was as close as Tiant would come to getting a ring. 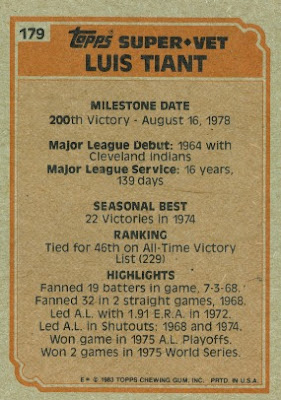