Shame on Topps for not only giving us a posed shot of Vern Ruhle, but repeating the same pose (different setting) he had in the '82 set.  Ruhle wasn't a star, but the veteran deserves better treatment on his 9th Topps card. 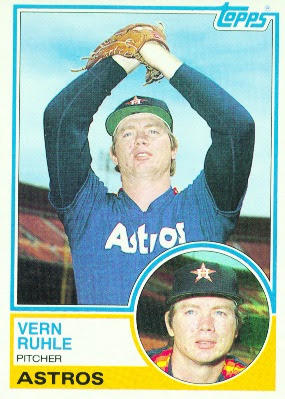 Player:  Vern Ruhle grew up in Coleman, Michigan which is about 40 minutes from my hometown.  He was taken by the Tigers in the 17th round in the '72 draft and was able to stay in state.  He debuted with Detroit at the end of the '74 season, making three starts and two long relief appearances.  Ruhle won both of his decisions with a 2.73 ERA.

In 1977 the Tigers were disappointed with Ruhle after three rough starts in May and sent him down to the minors.  He didn't return until September and finished the year with a 5.70 ERA in 66.1 innings.  The Tigers released Ruhle the following spring, closing the book on his Tigers tenure.

Ruhle wasn't out of work long as he was picked up by the Hosuton Astros.  He spent the first three months of the '78 season in the minors and made an immediate impact upon his return to the show.  He had back to back shutouts in August and had a 2.12 ERA with no home runs allowed in 68 innings. Ruhle started the '79 season as the Astros #4 starter but missed three months due to injuries.  Limited to ten starts, Ruhle's ERA nearly doubled to 4.07.

Pitching at the back end of the Astros rotation, Ruhle had a career year in 1980.  Already in the midst of a solid year, Ruhle stepped up with five complete game wins during the stretch run.  He set a personal best with 12 wins and would have been third in the NL in ERA (2.37), but he fell just short of qualifying with 159.1 innings.  Ruhle started Game 4 of the NLCS against the Phillies.  He allowed three runs in seven innings and recieved a no decision.  The Astros eventually lost the game in extra innings and dropped the deciding Game 5.

As the Astros #5 starter in '81, Ruhle made 15 starts and relieved in five others with a 2.91 ERA.  Incredibly this was the highest ERA of all Astros pitchers with 63 or more innings.  Ruhle was given the starting assigment in Game 4 of the NLDS but was outdueled by the Dodgers' Fernando Valenzuela and lost 2-1.

Ruhle won seventeen games over the next two seasons and he was phased into a bullpen role in '83.  He spent the '84 season as a long reliever and spot starter.  His ineffectiveness led to a 1-9 record and a 4.58 ERA.  The Astros cut Ruhle loose and he signed with the Indians for the '85 season.

With the Indians Ruhle filled a similar role with similar results.  Pitching in 42 games with 16 starts, he received little offensive support and had a 2-10 record with a 4.32 ERA (96 ERA+).

Ruhle had trouble finding work in '86, but caught on with the Angels mid-season and provided some depth to their pitching staff.  Mainly pitching in long relief, Ruhle had a 4.15 ERA in 47.2 innings.  He gave up two runs in two-thirds of an innings in the ALCS loss to the Red Sox.  Ruhle pitched in the minors in '87 but was finished as a big-leaguer. 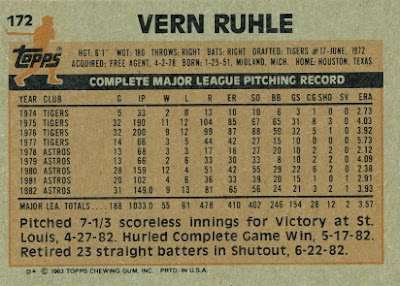 Flipside:  I don't know why I never noticed this before but Topps is more specific in the innings pitched column in '82 and rounds off the innings for all the previous years. Ruhle never reached 200 innings in '76 falling one out short at 199.2

Oddball:  I already mentioned Ruhle had the highest ERA on the Astros '81 team.  Here is a look at that pitching staff. (ERA, innings pitched):

History:  Ruhle always seemed to be big deal in Mid-Michigan since he was a loal hero.  He was a decent back end of the rotation pitcher for a while and was in the spotlight in the '80 NLCS.  He was involved in a controversial call which caused a 20 minute delay when he speard a soft liner off the bat of Garry Maddox in Game 4.  The play was either a double play or triple play depending on whether he trapped it or not.
Ruhle transitioned into a fine pitching coach serving in that capacity for the Astros ('97-'00), Philles ('01-'02), Mets ('03), and Red ('05-'06).
While in spring training with the Reds in '06 he was diagnosed with multiple myeloma.  The cancer which attacks plasma cells was pretty aggresive and Ruhle passed away on January 20, 2007.