Here is a great action shot of Bo Diaz taken at Shea Stadium.  This is Diaz's fifth Topps card and they featured him donning catcher's gear for the second year in a row, something that would continue until they showed him batting in the '88 set.
Not sure what is happening here, maybe a throw just came in from the outfield and Diaz is checking a runner between first and second base. 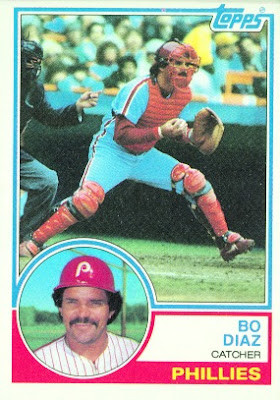 Player:  Baudilio "Bo" Diaz was signed as a free agent by the Red Sox in December of 1970.  The Venezuelan preferred to stay in his home country and didn't play much in the minors until 1974.  In 1977 the Red Sox gave him a brief look, but he struck out in his only at bat.  With Carlton Fisk around, Boston had little need for another catcher so they packaged Diaz and three others to Cleveland for Dennis Eckersley and Fred Kendall.

By 1980 Alexander was out of the picture and Diaz platooned with Ron Hassey.  Diaz batted just .227 with three home runs in 207 at bats.  Hassey was injured in '81 which opened the door for Diaz to play everyday.  Diaz caught fire and at the time of the strike, was hitting .356/.400/.568.  He was rewarded with an All-Star appearance for the AL, but struck out in his at bat.  Diaz himself was felled for a few weeks to an injury and cooled off, batting .313 in 199 plate appearances.

The Indians moved Diaz to the Phillies in a three team, five player deal that saw Lonnie Smith land in St. Louis, and Lary Sorensen in Cleveland.  The Phillies made Diaz their everyday starter and he responded with a career year.  Diaz batted .288/.333/.450 with 18 HR and 85.  His production fell off in '83 (.236, 15 HR) but it was a great year for the team as the Phillies won the NL East.  Diaz was two for thirteen in the NLCS victory over the Dodgers.  Although he had five hits in fifteen at bats the Phillies fell to the Orioles in the World Series.

Diaz was hampered by knee injuries in '84 and was limited to only 27 games.  In '85 he broke his wrist in April and missed nearly two months.  He struggled when he returned and was traded to the Reds in a six player deal.  Diaz played better with his new team and was able to salvage the season with a .245 in 263 trips to the plate.

The veteran played nearly everyday the next two years and hit .272 and .270 in the '86/'87 seasons.  He hit 25 homers over this span and contributed 3.4 defensive Wins Above Replacement.

Shoulder and knee problems plagued Diaz the next two years and he hit under .220 in limited action.  He retired following the '89 season after 13 years of major league action. 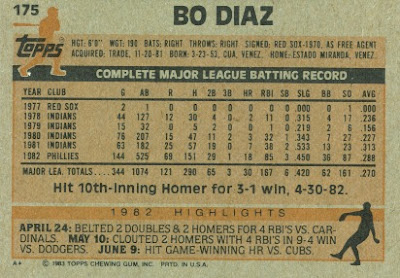 Flipside:  Judging by Topps decision to give Diaz a card ending in 5, they expected more full-time seasons from Diaz.  As you can see, '82 was his first year as a starter.  For his career he had four seasons with 134+ games played.   Every other season he played 92 or less.

Oddball:  Diaz was catching when Robby Thompson made history by getting caught stealing four times in a 6/27/86 contest.  Diaz gunned down Thompson three times on failed hit-and-run plays.  The fourth caught stealing occurred when reliever John Franco picked off Thompson as he broke for second base.

History:  Diaz was a two time All-Star and is best remember-ed as the catcher on the pennant winning Phillies in '83.  Maybe Diaz would have had fewer injuries had he not played in the off season.  The grind of catching seems hard enough.
Diaz passed away in 1990 when the satellite dish he was attempting to move fell and crashed on top of him.