Harry Spilman seems unsure of himself as he takes a whack at a pitch in a bright spring training photo.  This is his fifth Topps card, not bad for someone with 280 career at bats when this card came out. 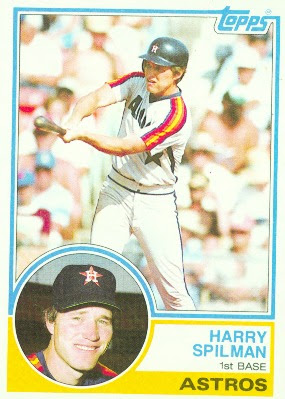 Player:  Harry Spilman was signed by the Reds as an undrafted free-agent in 1974 and started to get some attention when he hit .373/.453/.562 at AA Trois-Rivieres in 1977.  He got his first MLB hit in 1978 when he was given four pinch at bats late in the season.   He spent a good part of ’79 back in the minors but was deployed by the Reds as pinch hitter with a handful of starts at first and third.  He batted .214 in 65 plate appearances and was 0-2 in the ’79 NLCS.
Spilman spent 1980 as a pinch hitter and was given a start at first about twice a month.  He batted .267 with an OPS+ of 109 and hit the first four homers of his career.  He started the ’81 season in the same role but was traded to the Astros for Rafael Landestoy in June.   Spilman never got on track and batted just .241 with just one extra base hit in 64 trips to the plate.
The Astros kept Spilman on the bench the next four years as a pinch hitting specialist and occasional starter at first.  From ’82 through ’85,  he never came to the plate more than 87 times and posted batting averages of .279, .167, .264, and .136.
He signed as free agent with the Tigers where he was reunited with former Reds manager Sparky Anderson who remembered Spilman as a youngster in Cincinnati.  The move was a curious one as the Tigers already had a similar player in Dave Bergman.  Spilman was given a few starts at DH but after hitting .245 he was released mid-year.  The Giants picked him up and he did well posting a line of .287/.368/.426 with a 124 OPS+.  Including his time with Detroit he had a career high 143 at bats.
Spilman continued in a reserve role starting only six games in ’87 but his numbers dropped across the board.  He did hit a pinch HR in the ninth inning of Game 3 of the NLCS against the Cardinals to cut the score to 6-5 with two outs in the ninth.  Nonetheless the Giants lost the game and the series.
Spilman hit just .175 in 40 at bats with the Giants in ’88 and was cut in August. He had five hitless at bats after Houston picked him up.  He spent part of ‘89 as a reserve for AAA Tucson but was 10-36 in 32 games with Houston in ’89 which rounded out his major league career.  He played one more year at Tucson before hanging up the cleats at age 36. 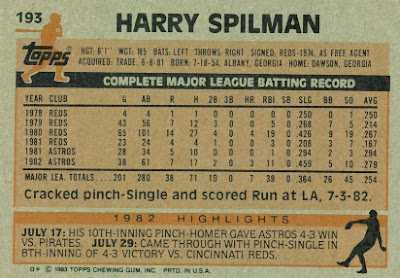 Flipside:  Topps liked to report highlights of games the player's team won, but geez they could have made an exception in this case.  In a 7-6 loss against the Giants on 9/30 Spilman went 4-5 with two home runs.  His second tater gave the Astros a 6-5 lead in the ninth.  I suppose if Houston relievers Danny Boone and Dave Smith hadn't blown it in the ninth, the back of Spilman's card would have been different.

Oddball:  Despite having never played catcher in the minors, the Reds worked Spilman out there during spring training in 1980.  He caught just two innings as a Red but got into 22 games behind the plate with the Astros and Giants, including three starts.  Even in retirement his receiving ability came in handy as he caught his neighbor Nolan Ryan in off season workouts.

History:  Spilman was one of the last players to make a career out of pinch hitting.  With 12 and 13 man pitching staffs there no longer remains room  for such a player.  Spilman carved out a 12 year career as a left-handed bat who could play both corner infield spots and catch when needed.  His career numbers (-0.7 WAR, .237 batting average) are poor but he is an example of a player doing what it takes to stay in the majors.
Spilman has coached in the minors and majors since his retirement which included a stint with Houston as the Astros hitting coach from 2000-'04.
Posted by Brandon at 10:00 PM