Marty Bystrom's third Topps card is one of the rare staged action shots in this set and is reminiscent of Topps cards of the 60's and 70's.  Bystrom has some poofy hair in the "action" shot but it is cut much closer to the head in the inset.  Here is a good shot of his white man 'fro. 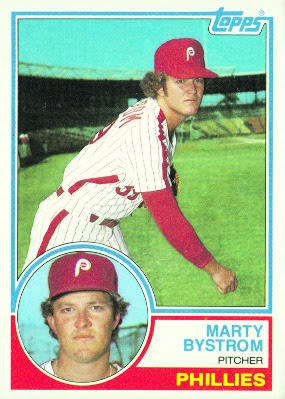 Player:  Marty Bystrom was signed by the Phillies as an 18 year old free-agent in December of 1976.  A year and a half later he hurled a perfect game at single-A Peninsula throwing 67 of his 89 pitches for strikes.

Bystrom made his MLB debut with the Phillies on Sept 7, 1980 with an inning of scoreless relief and three days later he twirled a complete game shutout over the Mets.  He followed that up with seven scoreless innings and three more quality starts as he helped the Phils lock up the NL East.  The rookie was named NL Pitcher of the Month as he ended the year with a 5-0 record and a 1.50 ERA in 36 innings.  He made one start each in the NLCS and World Series and received a no-decision in both games.  The Phillies won the series to cap Bystrom's fantastic rookie year.

A back injury during the spring delayed the start of Bystrom's '83 season.  When he came back in May he struggled to regain his form.  A shutout of the Expos on 9/14 helped Bystrom earn a postseason roster spot despite a 4.60 ERA during the regular season.  Bystrom threw one scoreless inning in the NLCS as the Phils won the pennant but lost to the Orioles in the World Series.

The next spring, Bystrom injured a nerve in his shoulder and his '84 season did not start until May.  After 11 starts the Phillies traded Bystrom and prospect Keith Hughes to the Yankees for Shane Rawley.  He had struggled with Philadelphia but had a 2.98 ERA in 7 starts for New York.  He underwent elbow surgery in the offseason and did not return until July.  He found the road to recovery difficult and was hit hard (5.71 ERA) in 8 starts.
Bystrom spent the next four seasons in the minors playing for the Yankees, Giants, Phillies, and Indians organizations before calling it a career at age 30. 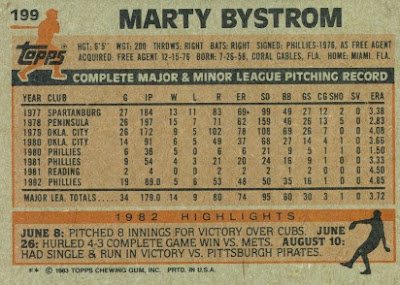 Flipside:  That is a lot of innings for a young arm.  Including postseason work, Bystrom logged 690 innings in his 18-21 year old seasons. While I am no doctor or pitching coach I wonder if it played a role in his constant health problems.

Oddball:  The Phillies were able to get Bystrom on the postseason roster in 1980 despite the fact that he wasn't on the big league roster until September 1st.  Bystrom replaced injured pitcher Nino Esponosa and the maneuver was cleared by the commissioner's office.  It happens all the time these days but the move was controversial at the time.

History:  Bystrom had a great start to his career but what followed was as injury riddled battle which included five incomplete seasons in the majors and four more spent completely in the minors.
He ended his career with a 29-26 career W-L record to go with a 4.26 ERA (87 ERA+) in just 435 innings.
Posted by Brandon at 10:08 PM