Rookie card alert!  Ok, so Bob Stoddard didn't have a long illustrious career, but this is the first of his two Topps cards.  The main pic is a posed shot of Stoddard taken at Tiger Stadium.  Since Stoddard didn't come up to the Mariners until August it's fairly safe to say it was taken when the Mariners visited Detroit in August.  The inset was taken at a different time (note the shorter mustache). 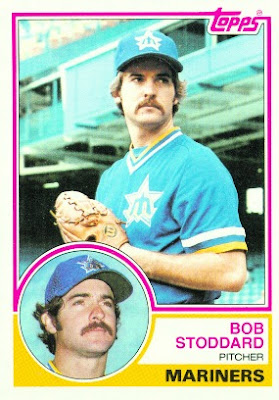 Stoddard was unable to crack the Mariners roster to start the '82 season.  He didn't take to the dry air of the Mariner's new AAA affiliate in Salt Lake City and his ERA jumped to 5.20.  Still the Mariners called him up to start game two of an August double header in Detroit.  He lost a complete game in a 3-2 decision to the Tigers.  He had several other strong outings including a two hit shutout over the Rangers a month later.  His major league line for the year showed a nifty 2.41 ERA (177 ERA+) in 67.1 innings.

The right-handed hurler started the '83 season in the rotation but struggled with consistency.  Stoddard's season was highlighted by a two hit shutout over the Red Sox on July 23.  It was his only start of the month as he had been banned to the pen.  He pitched in 35 games, 23 of which he started and had a 9-17 record and a 4.41 ERA (97 ERA+).

Stoddard was hit around for a 5.13 ERA (78 ERA+) in 79 innings during the '84 season.  By now Stoddard had fallen from prospect status and started 1985 back in AAA.  He was hit hard and released in June.  Picked up by the Tigers, he posted a 0.59 ERA in 30.2 innings for AAA Nashville and was called up by the Tigers.  Stoddard pitched in mop up duty and logged 13.1 innings while allowing 10 earned runs.

Stoddard's career path quickly entered journeyman status.  He was cut by the Tigers, signed by the A's, and later traded to the Padres in April of '86.  Called up a few months later he pitched well in limited use.  Despite a 2.31 ERA in 23.1 innings the Padres cut Stoddard in the offseason.  He caught on with Kansas City and made his Royals debut with their major league squad in June, '87.  He pitched fairly well in 40 frames with a 4.28 ERA (108 ERA+) but it would turn out to be his last hurrah in the majors.  His final stats show a 18-27
career record despite a 104 ERA+ in 433.1 innings of work. 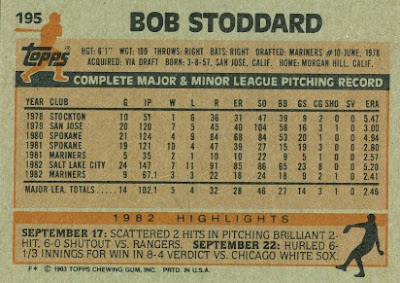 Flipside:  I already mentioned his two-hitter on 9/17 but it should be noted that he lasted 7.2 innings without giving up a hit.  At that time it was the deepest point in a game that a Mariner had taken a no hitter.

Oddball:  Stoddard labored in the minors in '88 and '89 before calling it quits. He came out of retirement as a replacement player during the lockout in '95 and was signed to a minor league deal by the Mets.  The 38 year-old appeared in three games for Norfolk before retiring for good.

History:  Stoddard showed some promise early in his career but he never panned out.
Today Stoddard runs his own baseball training facility and youth baseball league, aptly named Stods.﻿
Posted by Brandon at 10:20 PM