Check out that headband!  Rod Carew's fashion choice was typical of athletes in the early 80's.  Others who wore it well include gridiron great Walter Payton and later hoopster Cliff Robinson.
This is Carew's 16th Topps card.  I must say that his glove looks enormous. 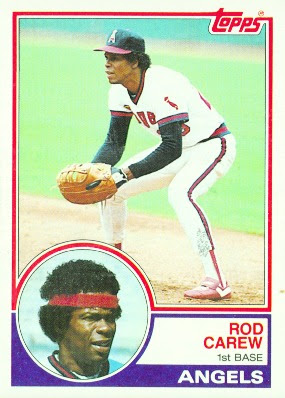 Player:  Rod Carew was born in the Panama Canal Zone and emigrated to New York City when he was 14.  He did not play baseball in high school, opting to play semi-pro ball instead.  He caught the attention of the Twins who signed him to a free agent contract in 1964.

Carew debuted with the Twins in '67 and won the AL Rookie of the Year award and appeared in his first All-Star game.  He batted .292/.341/.409, very impressive numbers for the late 60's especially a middle infielder.  He followed that up with a .273 average which would prove to be the lowest of his career as he would peel off 15 straight seasons batting over .300.

The left-handed second baseman made a living of using the whole field and he won the first of seven batting titles in 1969 with a .332 mark.  He struggled in the Twins ALCS loss to the Orioles, eking out just one hit in 14 at bats.  Carew was batting .376 in June 1970 when he tore ligaments in his knee and was sidelined until September.  He came back as a pinch hitter but was hitless in five at bats and two more in the post season as the O's beat the Twins again.

Aggressive on the base paths, Carew stole home seven times in '69 a feat he would pull off 17 times in his career.  After healing fully from his knee injury he would steal 30-35 bases a year.

Carew signed with the Angels in '79, and despite a thumb injury that limited him to 110, the year was a success as he bated .318 and returned to the postseason for the first time in nine seasons.  Despite a 7 for 17 performance from Carew, the Angels dropped the ALCS in four games to the Orioles. 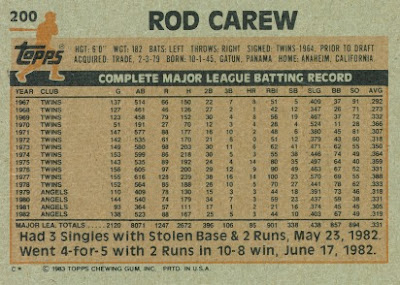 Flipside:  Some might fine print there.  I'm surprised Topps didn't forgo the seasonal highlights and give his stats a larger font.

Oddball:  Carew didn't want to retire after the '85 season but he did not receive one single offer from a major league team.  Ten years later he was found to be a victim of collusion, and was awarded over $780,000.

Maybe he felt bad about teaching kids to hit off balance in the late 70's 'cos now he has his own website dedicated to the science of hitting.

History:  Simply put, Carew was one of the best hitters ever.  His .328 lifetime batting average is the 34th highest of all-time.  More of his career achievements will be explored in the next post:  Rod Carew Super Veteran.
Posted by Brandon at 2:41 PM