Here is Floyd Rayford on his first solo Topps card.  It appears to be a spring training photo and Topps was wise to get a shot of him then since he only played 146 innings in the field in '82.  Rayford looks rather disinterested in the inset picture. 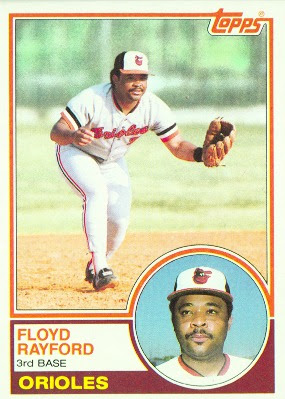 Player:  Floyd Rayford was a high school catcher drafted in the fourth round by the Angels in '75.  "Honey Bear" played five seasons in the Angels chain with moderate success, playing primarily at the corner infield spots.  While stationed at AAA Salt Lake City in '79, the Halos traded Rayford to the Orioles for Larry Harlow.  Rayford made his MLB debut in '80 but spent most of the year at AAA Rochester.  He eeked out 4 hits in 18 at bats with the O's.

Rayford spent all of '81 in the minors and worked on re-learning the catching position.  He made the '82 Orioles team but rotted on the bench most of the year.  He played in only 11 of Baltimore's first 72 games.  But when manager Earl Weaver moved Cal Ripken Jr. to SS, Rayford then started 13 games over the next 5 weeks at 3b.  Although he knocked 3 home runs over this stretch, he hit just .136.  Rayford ended the year with a .132/.220/.302 line.  He got most of his action at the hot corner, while logging three innings behind the plate.

The burly thirdbaseman started the '83 season back at Rochester and was tearing it up at a .371 pace when he was traded to St. Louis.  They put him on their major league squad and used him as a pinch hitter and platoon starter at 3b against lefties.  He posted a .212/.278/.337 line in 117 trips to the plate.

Rayford was sold back to Baltimore during spring training in 1984.  He served as the O's backup catcher and hit lefties well (107 OPS+) but struggled against right handers (73 OPS+).  Overall he hit .256 with four homers in 269 plate appearances.  He played more third than catcher in '85 and had a career year.  He hit 18 long balls and batted .306/.324/.521 while earning 2.8 Wins Above Replacement in 359 at bats.  His success was short lived as he was quite a hacker, walking 10 times with 69 whiffs.  The '85 campaign represented his first and only season spent entirely in the bigs. 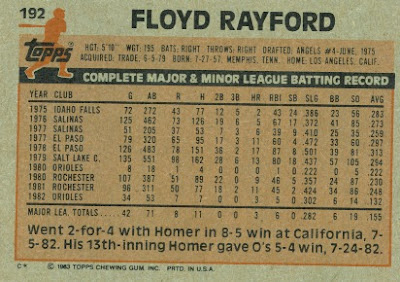 Flipside:  Having played just 34 games, Rayford was lucky to get a card in this set.  It is hard to imagine Rayford stealing double digit bases, but he did just that in his younger (and presumably lighter) days in the minors.

Rayford had only 7 hits in '82 but 3 landed over the fence for home runs.

Oddball:  Although the Angels traded Rayford to the Cards in the midst of his '79 season at Salt Lake, he stayed with the Gulls (California's top affiliate) and was voted team MVP.  You won't see that happen anymore.

History:  Rayford had an interesting career highlighted by one very good year in '85.  He never played in the postseason but had some good years in the minors.  Since ending his playing days Rayford has coached in the minors for several franchises.