Looks like Steve Rogers is wearing a cool red Expos t-shirt or is it a jersey?  Judging by the sleeves I'd say it's a t-shirt.  This is his 10th base card and just looking at his Topps cards, his first four from '74-'77 were without any facial hair.  From '78-'81 he appears as he is here, with a shaggy mustache.  Then he has a full beard and looks quite different on his '82 cardboard.  Then he came back with just the 'stache for '83 and '84 before returning with the beard in '85.  Meanwhile, Coca-Cola gets some free advertising in the background. 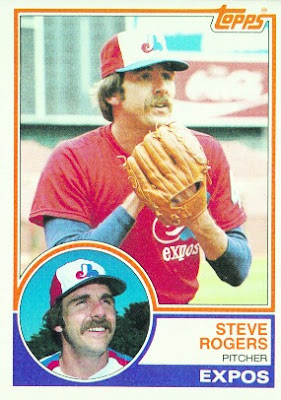 Player: After earning a bachelors degree in petroleum engineering at Tulsa University, Steve Rogers was drafted by the Expos in the secondary June draft in 1971.  He struggled with some terrible minor league teams in '71 and '72, but Rogers put it together in '73 and was called up in the middle of July.  Despite his late start he won 10 games with a sparkling 1.54 ERA, 260 ERA+, and 1.060 WHIP in 134 innings which drew enough attention to get him a second place finish in Rookie of the Year voting.
The sophomore jinx bit Rogers hard in '74.  He proved his durability making 38 starts but lost 22 of them with a 4.46 ERA.  He rebounded lowering his ERA to 3.29 but the Expos were still struggling to score runs and he won just 11 games in '75.  The following season was a frustrating one for Rogers as he missed a month with a broken hand after punching a bat rack.  Perhaps he should have punched the Expos batters instead.  While he posted a 3.21 ERA in 230 innings, Rogers lost 17 games with just 7 wins, marking the second time in three years he led the NL in losses.
The Expos started to show improvement in '77 and he won 17 games with a 3.10 ERA.  Most impressive was his workload as he made 40 starts and logged 301 innings.  Rogers continued to carry a heavy load for the Expos in '78 as he had a two-inning save on July 3, two days after a complete game and made another start three days later. A month later he faced 43 batters in an 11.1 inning-no- decision.  Not surprisingly, by the end August he was on the disabled list with elbow tendonitis, ending his season with 13 wins and a 2.47 ERA.
After elbow surgery in the offseason Rogers returned with a 13 win season in '79 and 16 wins in '80 with ERAs of 3.00 and 2.98.  Another strong year followed in '81 and the Expos made the postseason for the first time and knocked off the defending champion Phillies in the strike year NLDS.  Rogers went head to head against Steve Carlton twice and got the win both times, allowing just a single run in the series.  Now facing the Dodgers, Rogers shut them down in Game 3 of the NLCS allowing just a single run in nine frames.  He came into Game 5 out of the pen with the score tied 1-1 in the ninth
and allowed a home run to Rick Monday which gave LA the lead and eventually the World Series berth.
Rogers was coming off his finest season when this card was issued as he won a career best 19 games with an NL leading 2.40 ERA in 1982.  Rogers had one more solid year in his arm winning 17 with a 3.23 ERA in '83.  His five shutouts led the National League duplicating his league best five in '79.
Shoulder problems sapped his health and effectiveness as he won just 6 of his 28 starts in '84, finishing with a 4.31 ERA.  It ended a nine year stretch of sub 3.50 ERAs.  After a rough start to the '85 campaign, the Expos released their all-time wins leader.  He pitched for the Angels and White Sox in the minors but retired after the season. 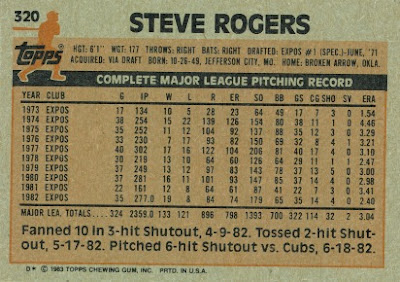 Flipside:  I was surprised when checking his stats that Rogers never won 20 games.  He has to be one of the better starters not to have achieved the milestone.
Oddball:  In 1978 Steve Rogers intervened on teammate Chris Speier's behalf when he was getting berated in the locker room by then Expos GM Charlie Fox.  Upset at Speier's recent 4 for 31 cold spell, Fox was really letting Speier have it when Rogers got in the executive's face and Fox ended up slugging his hurler in the jaw.  Rogers and Speier walked away and the struggling SS responded by hitting for the cycle and driving in six runs.  When the NL didn't discipline Fox, Marvin Miller, the executive director of the players association, petitioned the league president Chub Feeney writing:

Which I suppose is a diplomatic way of saying Fox was lucky he didn't get his ass kicked.  He never was disciplined but by the end of the year he was fired and Rogers got a six-year contract.
History:  Much like Dave Stieb who toiled for Canada's second team in Toronto, Rogers was truly one of the underrated pitchers in the game.  From '75-'83 he recorded a 3.00 ERA, and averaged 4.3 WAR and 260 innings pitched.  He started the only All-Star game in Montreal in '82, getting the win with a run allowed in three frames.  He retired with a 158-152 mark which is more indicative of the Expos struggles in the 70's than Rogers' ability.
Posted by Brandon at 5:42 PM