Look at this, another rookie card.  Of course Dave Van Gorder only has two cards so maybe it deserves another title like half-of-his-career-card.  I don't know, maybe you have some better ideas.  Van Gorder's other card is an odd one and can be seen here.
This card is a bit different in that Van Gorder clearly is need of some shades as he squints across a spring training infield. 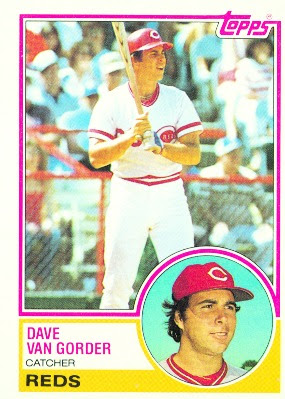 Look at Van Gorder squint.  Seriously Topps, that's the best picture you had of this guy?  I'mstarting to think maybe he was about to sneeze.
Player: Dave Van Gorder was a second round pick out of USC in 1978 and never played below the AA level.  It could not have been easy following in the big footsteps of Johnny Bench but Van Gorder tried when he was called up to Cincinnati in June of '82.  Everyone was looking to see who the Reds next catcher would be.  Alex Trevino had a head start on Van Gorder and our subject did little to gain on him hitting just .185 in 137 at bats.

Sent back to AAA Indianapolis for the '83 season, he did nothing to inspire Reds management and took a big step back hitting just .226/.287/.311.  Van Gorder got off to a better start in '84 and was recalled in July.  He batted 113 times while sharing catching duties with other career back-ups Brad Gulden and Dann Bilardello.  The catching situation was so bad that Van Gorder's .228 average was the best of the group and Gulden's .308 slugging percentage was .028 higher than Bilardello's and .060 higher than Van Gorder's.

Van Gorder broke camp with the Reds in '85 and the Reds added Alan Knicely to the trio while removing Gulden.  Van Gorder slugged the first two homers of his career and avoided the minor leagues for the first time but hit just .238.  The Reds acquired Bo Diaz in August which spelled the end of the Reds catching woes.

The burly backstop was back in the bushes in '86, with his major league action limited to ten hitless at bats in September.  Van Gorder signed with the Orioles and spent a few months as their backup with five hits in 21 at bats.  Released by the Orioles after the season, he was now 30 years old and had shown no improvement from his younger days and his career was over. 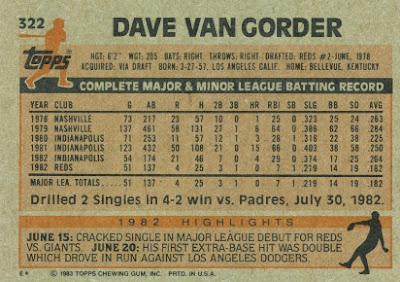 Flipside:  The 15 home run season at Indianapolis in '81 was a rare burst of power for Van Gorder as he never slugged more than six in a season before or after.
Oddball: USC won the College World Series with Van Gorder behind the plate.  They had several fringe level players like Van Gorder, Dave Hostettler, Bob Skube, Jeff Schattinger, and Chris Smith. Teammate Dave Engle ended up with the most accomplished baseball career but another player went on to a Hall of Fame career in another sport.  Former Bengal offensive tackle Anthony Munoz pitched at USC...what an intimidating presence he must have been on the mound!
History:  Van Gorder had a career typical of a third string catcher with a .212/.280/.267 line in 468 plate appearances.  With a better arm, perhaps he could have earned a little more playing time, but he threw out just 18% of the runners stealing on him. His strength defensively was apparently his ability to block balls in the dirt as he allowed just five passed balls in his career.
According to his Wikipedia page, he is currently a manager for UPS in Las Vegas.
Posted by Brandon at 4:23 PM