Mike Marshall looks like he's loading up for a high lobbing slow-pitch softball toss rather than a major league pitch.  This is Marshall's second Topps card and the first of his own.  It appears to be a sunny day as the Expos look on from the third base dugout. 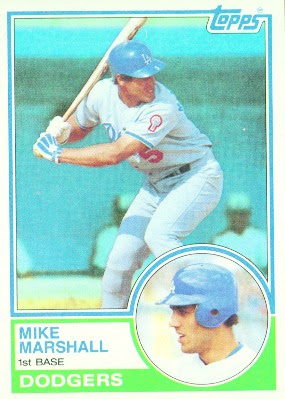 Player:  Mike Marshall was a minor league superstar who in turn became a super prospect in the early 80's.  A 6th round pick in 1978 he put up gaudy minor league stats including a monstrous season at AAA Albuquerque in 1981 batting .373 with 34 HR and driving in 137 runs in just 128 games.  The big 21-year old slugger was promoted to the majors that September but went just 5 for 25.  He struck out in his only postseason at bat in the NLDS.  The Dodgers, eventual world champs, didn't need to push Marshall and in fact he didn't even make the team in '82.  He returned to bashing AAA pitchers until he came up in late June. He was given a few starts at first base and rightfield but was used mainly as a pinch-hitter.  He hit five homers in 110 plate appearances and hit .242.
With Ron Cey and Steve Garvey gone the Dodgers moved Pedro Guerrero to 3B and gave youngsters Greg Brock (1B) and Mike Marshall (RF) a chance in '83.  The 6'5" Marshall played in 140 games but he struck out nearly three times as much as he walked with a .285/.347/.434 line.  He struggled in the NLCS with just two hits in 15 at bats.  It wasn't a bad year but it fell short of most fans expectations. He got off to a great start in '84 clubbing 14 HR in the first half and making the NL All-Star team.   His production dropped considerably the second half and he finished with 21 HR and a .257/.315/.438 stat line.
Marshall had his best year in 1985 with 28 HR, 95 RBI and a nifty slash stats of .293/.342/.515.  He had three extra base hits against the Cardinals but the Dodgers fell short in the NLCS.  A bad back hampered his '86 campaign as he missed quite a bit of time in July and August.  He hit just .233 with 19 HR in what was a down year for the Dodgers.  His playing time was diminished again in '87 but he was productive when he was in the lineup hitting .294 with 16 dingers.
Marshall played in a career best 144 games in '88 and was a big part of the limited offensive attack of the Dodgers.  Marshall with 20 HR and 82 RBI and eventual NL MVP Kirk Gibson (25, 76) were the only Dodgers with more than 10 homers or 64 RBI.  The lack of pop in the Dodger bats became even more apparent after Gibson was shelved after his epic Game 1 of the World Series.  Facing the power-laden A's, Marshall was now the lone serious long ball threat in the lineup and his three-run bomb in Game 2 got things rolling as the Dodgers won the game 6-0 and later the Series in five. ﻿

Injuries cost Marshall the entire month of June in '89 and he was never really got on track.  At one point he went 193 plate appearances without a homer.  He finished with 11 in 370 at bats with a .260 average.  After the season the Dodgers traded him to the Mets with Alejandro Pena for Juan Samuel.  Although just 30 years-old, Marshall's best days were behind him.  He split 83 games between the Mets and Red Sox in 1990 and hit 10 HR with a .258 average.  He played 62 games for Boston in '91 but was released and played two games for the Angels before the year was over.

Marshall played in Japan for the Nippon Ham-Fighters in 1992 which would be the end of his playing career for the time being.  He got into coaching in the independent Northern League and played some in 1999.  At age 39 hit .307 in 33 games before resuming his full time coaching role. 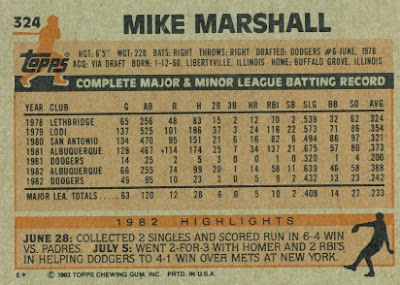 Flipside:  Those minor league numbers are impressive as he never hit below .321 or slugged less than .494 while in the Dodgers chain.
Oddball:  Before LA media had Matt Kemp and Rihanna's romance to write about they had Mike Marshall and Belinda Carlisle.  I guess being a star outfielder for the Dodgers has it's perks.
History:﻿  Marshall's career was definitely diminished by injuries but he was able to win World Series rings with the Dodgers as an on-looker in '81 and as a major cog in '88.  In 11 seasons he hit 148 HR with a .270/.321/.446 line and 10.0 WAR. He never lived up to the hype his minor league stats caused but I'm not feeling sorry for a guy who dated Belinda Carlisle.  As we said in the 80's she was rad.
Anyway back to Marshall....after his playing career he coached and managed in the independent minor leagues.  His coaching career is best known for an incident in which he brawled with former major leaguer Tony Phillips in 2011.  You can see Phillips (warming up at 3B) Marshall (moving in from the 3B coaches box) go at it at the 6:00 mark of this video.  It's hard to see but it looks like Phillips, a year older and seven inches shorter than Marshall, got the best of him.  The visiting and appropriately named Chico Outlaws were managed by Jose Canseco who forfeited the game as he thought another brawl would break out if they continued.
Posted by Brandon at 3:35 PM