﻿
This is Luis DeLeon's second Topps card and first as a Padre.  I believe this is in San Francisco where we see this orange wall in the background in so many of the cards in this set.  He pitched two day games in San Fran in '82 so it was either June 26 or September 19.  Weather records show a day time high of 78° in the June game and just 72° in the September game.  DeLeon could have worn long sleeves in either game but if I had to pick one I'd lean toward the latter game. 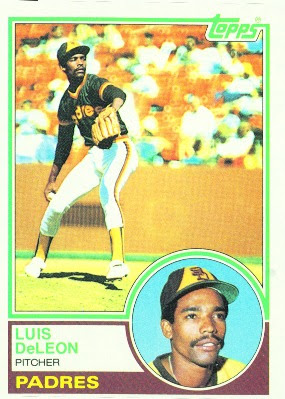 Player: Luis DeLeon was signed out of Puerto Rico by the Cardinals in 1977.  He spent four years in their system including a decent 10 game major league debut at the tail end of the '81 season.  He was included in the Ozzie Smith / Garry Templeton deal which landed him in San Diego.
DeLeon was a reliever all but his first year in pro ball and he immediately went to work in the late innings for the Padres.  He shared the closer role with lefty Gary Lucas and saved 15 games with an impressive 2.03 ERA and 0.912 WHIP in 102 innings.  He displayed remarkable control especially for a young pitcher walking just eight batters unintentionally.  He and Lucas teamed up again in '83 with DeLeon saving a baker's dozen with just a slight uptick in his rate stats in 111 frames. In two years, DeLeon had earned a reputation for taking the ball often and being unfazed in the late innings.
The Padres traded Lucas away in the offseason and made a big splash by signing closer Goose Gossage who wouldn't be sharing saves with anyone.  ﻿DeLeon struggled with elbow tendonitis and was ineffective when healthy.  Surprisingly the young hurler was back in the minors by mid-year.  He was limited him to 32 games with a 5.48 ERA and was left off the postseason roster.
DeLeon split the '85 season between Las Vegas and San Diego and improved somewhat with a 4.19 mark in 38 innings.  The Padres did not renew his contract and DeLeon signed with the Orioles in '86.  He spent all of the '86 season and most of the '87 campaign at AAA Rochester. He recorded a 4.79 ERA 20.2 innings of work in Baltimore in '87 and was not re-signed.
DeLeon spent the next year in the Astros system and moved on to the Mariners in 1989.  He made a single appearance for the big league M's and spent the rest of his career in the minors.  He retired with a 3.12 ERA (116 ERA+) and 32 saves in 309 innings of work. 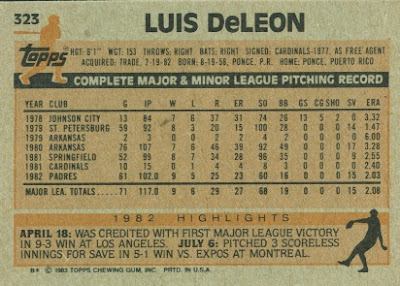 Oddball:  DeLeon had four brothers also named Luis.  Our subject was Luis Antonio but was known better as "Mambo".

DeLeon pitched in 207 games in his career. The first 206 were in relief before he made a four inning start for Seattle in '89.

History:  DeLeon had two great years for the Padres but pitched poorly during their pennant winning season in '84.  He was still pitching for his native Puerto Rico as recently as 2003, pitching in his 14th Caribbean Series at age 46.  DeLeon was inducted into the Caribbean Series Hall of Fame in 2011.
Posted by Brandon at 3:31 PM