I must say this is a rather blah picture of Joe Price considering most cards in this set have an action shot.  What’s the deal anyway?  Price appeared in 59 games in 1982 giving Topps ample time to capture him on the mound.  Price and his million dollar smile never seemed camera shy, so I’m sure he ate up the attention that this pose afforded him on his third Topps card. 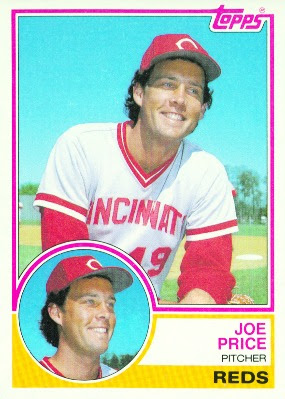 Player:  Joe Price made his debut with the Reds in 1980 and split his time almost evenly between the bullpen and rotation.   He logged 111 innings and completed two of his thirteen starts with a slightly better than average 3.56 ERA.  The Reds former 4th round pick appeared in 100 games over the next two seasons (with one start), saved seven games, and posted sub three ERA’s both years.   He struck out almost a batter per inning as his easy motion made his fastball deceptively quick.
Price joined the rotation in ’83 and although he missed time in May with a sore elbow and Septemeber with tendonitis in his rotator cuff he was 10-6 with a 2.88 ERA (132 ERA+) in 21 starts.  He made 30 starts in ’84 but he was not as effective as his ERA rose to 4.19 (90 ERA+).  He pitched his only career shutout on 7/27 against the Dodgers and his 171.2 innings would prove to be a career high as he was mainly a reliever-spot starter from this point forward.
Price worked out of the pen and made a handful of starts with a 3.90 ERA in ’85 followed by a dismal 5.40 mark in his free agent year in ’86.  Price signed with the Giants in ’87 and spent a chunk of the season at AAA Phoenix.  He was successful when he was called up and recorded a 0.914 WHIP in 35 frames.  Price was the winning pitcher in Game 5 of the NLCS against the Cards and he totaled 5.2 scoreless innings in the series.  The next year was a bit of a letdown (84 ERA+) as he pitched 61.2 innings in middle relief with three starts mixed in.
After several rocky outings in April of ’89 the Giants cut ties with Price and he signed with the Red Sox in May.  He did slightly better in Boston but finished the year with a 4.59 ERA in 38 games.  He pitched for Baltimore in 1990 (3.58 ERA in 65.1 innings), spent ’91 in the minors, and then retired.  Price finished his career with a 45-49 record and 13 saves in 906 innings of work.
Stuff:  86-90 mph fastball, curve, slider, change 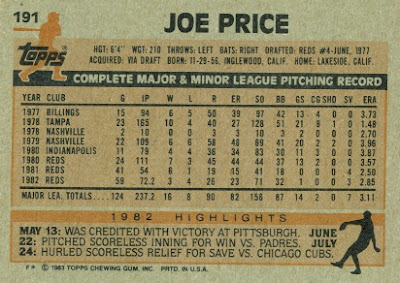 Flipside:  That one start in '82...it was a decent effort as Price went six innings, allowing one run on five hits and a walk.  He fanned eight batters but was tagged with the loss.

Oddball:  My handy-dandy copy of The Scouting Report: 1983 reports in Price's profile "...is often accused of making dates with women during his warm-up time in the bullpen."
You can't find scouting reports like that anymore.

History:  As kids and collectors were pulling this card in '83, Price was in the midst of his finest season.  His career year netted him 3.6 WAR which is nearly half his career total of 7.8.  He won a playoff game for the Giants in '87 but never played in the World Series.
After his playing days Price stuck around Cincinatti and is now is a big-shot with a local realtor.
Posted by Brandon at 5:34 PM