This is Terry Felton's one and only Topps card.  The very bright background makes his right forearm blend in and disappear.  The tough luck that accompanied Felton's career seems apparent in his solemn gaze in the inset. 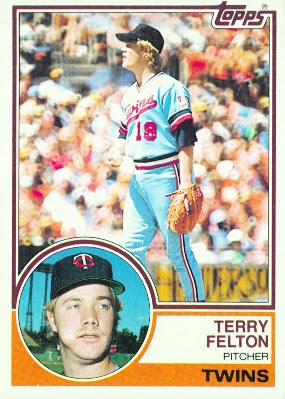 Player:  Terry Felton was a second round pick of the Twins in '76.  The hard throwing righthander advanced to AAA by '78 and debuted for the Twins late in September of '79 with two scoreless innings.

Felton made the starting rotation in 1980 but after a no-decision, three losses, and a three run inning in relief he spent the rest of the year at AAA Toledo.

Felton was in and out of the rotation with Toledo in '81 but pitched well enough to get a brief look at the tail end of the season.  Unfortunately he got rocked for six runs while recording just four outs.

The Twins were terrible in '82 losing 102 games and going 3-26 in the month of May.  Felton worked middle relief and was a spot starter  for the last place team.  While the '82 campaign would be Felton's only full year in the majors, he labored through it with a 0-13 record.  Although his record wasn't an accurate reflection of his talent, Felton did have his shortcomings.  He had a live fastball but was wild (76 BB in 117 innings) and had a propensity for giving up the long ball as evidenced by his 18 home runs allowed.  Still with a 4.99 ERA (85 ERA+) he deserved better than a winless season.  He did manage to save three games along the way.

Felton now 0-16 on his career, pitched two more years in the minors but never got back to the show.  He holds the major league record for most career losses without a win. 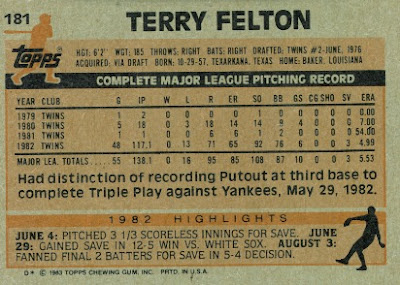 Flipside:  I used to stare at the back of this card and wonder how a pitcher could be so bad.  As I got older and knocked around in a few little league games, I felt sorry for the guy.

Oddball:  Felton shot and killed the family dog in 2004 when it attacked his two year old daughter.  By now a Captain with the East Baton Rouge Sheriff's Office, he pulled his gun after he was unable to get the rottweiler off his daughter.  According to this article, the dog inflicted enough damage that his daughter needed plastic surgery.

History:  Certainly there have been worse pitchers than Felton and he easily could have had a few wins.  Although he was used many times when the Twins were already down, amazingly they only won 6 of the 55 games he pitched in.  So what were Felton's closest calls to getting a win?

Felton's first career start 4/14/80 was decent.  He allowed three runs in seven innings and the Twins defeated the Angels 5-3 but the Twins didn't score until after he left the game.  He would make nine more starts in his career but would never top his 55 game score in his first start.

On 4/21/82 he came on in the 5th inning down 5-2 to the A's.  Maybe Felton could "vulture" a win?  He pitched four innings of scoreless relief with the only runners reaching on two walks.  While his outing was nice, it did little for his stat line but drop his ERA to 4.32

Five weeks later Felton started a contest against the Yankees and left in the 6th inning with a 2-1 lead.  Reliever Brad Havens was unable to hold the fort and the Twins eventually lost 6-4.  This is also the game mentioned on the back in which he participated in this triple play.

In an August 15 game against the Mariners, Felton was cruising along with a 1-0 lead heading to the 6th.  After the M's hit back-to-back singles in the top of the 6th, he misplayed a comebacker to the mound and a run scored to tie the game.  A ground out put the Mariners up 2-1.  Felton then issued an intentional walk and left the game.  The game got out of hand and the Twins ended up losing 10-2.

On 9/12, Felton entered with two outs in the bottom of the 4th inning with the Twins on top of the Royals 7-4.    With Twins starter Brad Havens unable to go five innings, perhaps this would be Felton's day.  Felton gave up the lead and no one else the Twins ran out there was any better. Incredibly, in a game in which the they were up 7-1 the Twins lost 18-7.

Finally on 9/28 the Twins jumped on Blue Jays starter Jim Gott and staked Felton to a 3-0.  The lead and Felton were both gone by the fourth as Toronto knotted the score at three each before winning it in the tenth

Felton was a product and representation of the hapless Twins teams of the early 80's.  He would be quite forgettable if he had won a game or two.  At least this way he is the answer to a trivia question.