Topps shows Cecil Cooper in a nice following through with his powerful swing on his 11th Topps card.  It looks like the guy on the left in the dugout is wearing an Angels satin jacket so this was probably taken in Anaheim or the Angels spring training home. 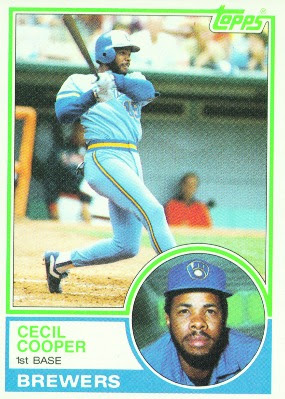 Player: Cecil Cooper is best know for his days with the Brewers, specifically the Harvey Wallbanger '82 pennant winning squad.  But Cooper started his career as with the Red Sox.  A sixth round pick in '68, he had some success in the minors and was selected by the Cardinals in 1970 Rule V draft but they returned him to the Red Sox organization the following spring.  (Here's young Coop in a Cardinal uniform).

Later in the '71 season Cooper made his MLB debut as a September call up for Boston.  He played well in his short stint with a .310/.388/.452 line in 49 trips to the plate.  Boston was deep in first basemen and Cooper had trouble cracking the Red Sox roster so another late season call up yielded just 19 plate appearances in '72.  The next year he was recalled in August and played regularly the rest of the way but batted just .238 in with three homers in 30 games.

Cooper got his chance to play and started against right handed pitching the next three years for the Red Sox.  He was not regarded as a good glove man early in his career and split his time equally between DH and first base.  He didn't do anything extraordinary in'74 as he batted .275/.327/.395 in 454 plate appearances.  He was much better in '75 as he increased his slugging to .544 and got on base at a .355 clip.  After four hits in ten at bats in the ALCS he struggled in the Red Sox World Series loss with a 1-19 showing.  Cooper was good but not great in '76 as he hit .282 with 15 HR in '76.

After the '76 season Cooper was dealt to the Brewers in a trade that returned former Red Sox Bernie Carbo and George Scott back to Boston.  Cooper was able to start everyday for the Brewers in '77. with mixed results.  Although he batted .300 he walked only 28 times and struck out 110 times.  He hit 20 homers but drove in only 78 runs as he hit .253 with RISP.

Cooper started to decline in '84 as his average slipped to .275, his home run total swooned to 11, and his OPS+ dropped under 100 for the first time as a Brewer.  He bounced back somewhat in '85 with a .293, 16 HR effort, but his best days were behind him.  He played another year and a half but Cooper's gap power and on base ability were greatly diminished.  Cooper was released after the '87 season and he retired 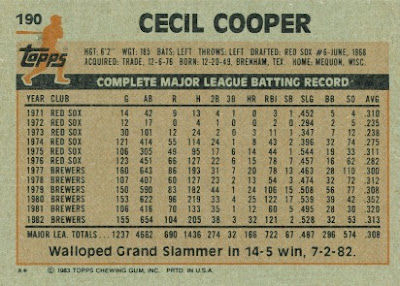 Flipside:  Cooper's grand slam capped off the one-sided affair against the Red Sox.  Already ahead 10-5, Cooper's blast off Tom Burgmeier drove in the last four runs.  Strangely the BoSox used just two pitchers as Mike Torrez started and gave up the first 9 runs with Burgmeier mopping up.

Oddball:  No wonder the Brewers traded for Cooper.  As a Red Sox the young left handed hitter with the sweet stroke hit .364/.397/.576 in 181 plate appearances against Milwaukee.

Cooper has coached and managed in his post playing days and was at the helm of the Astros for parts of three seasons from 2007-09.