This is Ed Vande Berg's rookie card.  I love the old Mariner uniforms, I just wish Topps had used a blue instead of hot pink for the border of the Mariner cards. 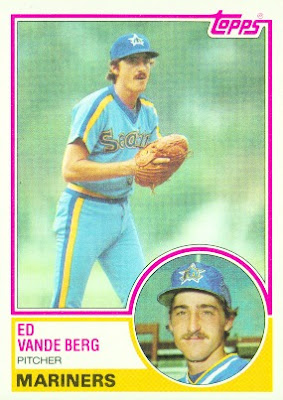 Player:  A 13th round pick of the Mariners in 1980, it only took Ed Vande Berg two years to crack the Seattle roster.  Converted to a reliever in '81 he made a name for himself in '82 when he pitched in an AL leading 78 games which set a record for rookie hurlers (since broken).  With a nasty slider, he held opposing batters to just 7 hits in 73 at bats with runners in scoring position.  He won nine games, saved five others, and finished with a 2.37 ERA.  Vande Berg finished fourth in AL Rookie of the Year voting.

Vande Berg filled a similar role in '83 with 64.1 innings in 68 games.  His ERA jumped up a run but he was still effective setting up games for closer Bill Caudill while saving five games on his own.

After the season Seattle traded Vande Berg to the Dodgers for veteran catcher Steve Yeager.  Although he had a 1-5 record Vande Berg sported an ERA of 3.41 (102 ERA+) across 71 innings.  Used in middle relief he did not register any saves in '86.

The Dodgers released him and he signed with the Indians.  Vande Berg did not fare well in Cleveland as his ERA inflated over five during the '87 season.  After he was cut by the Indians he was signed by the Rangers.  He was up and down between Texas and AAA all year.  With a 4.14 ERA in 37 frames of work he saved two games for the parent club.

Vande Berg spent the next four years at the AAA level but never made it back to the majors. 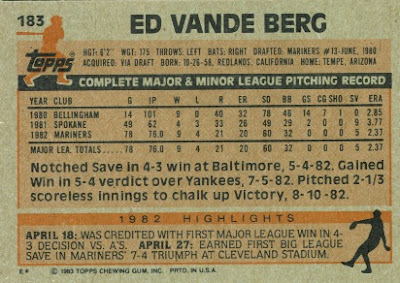 Flipside:  In Vande Berg's rookie year he pitched 76 innings in 78 games. His season marked the first in MLB history in which a pitcher logged more than 60 innings with less than an inning per game. He may have been the first heaviliy used LOOGY as he faced just one batter 19 times.

Oddball:  Vande Berg was very sucessful in college.  He mainly worked in long relief while at Arizona State with ERA's of 8.00 as a freshman and 4.56 as a sophomore.

After being out of pro ball for three years, Vande Berg was a replacement player for the Giants during spring training in '95.

History:  Vande Berg got off to a good start to his career and was an effective reliever for a while.  He retired with a 3.92 career ERA (105 ERA+) in 519 innings with 22 saves.  He hung around for a while trying to get back to the majors but never made it.
﻿