Topps captures Bob Clark taking a whack a pitch in a decent action shot.  This is his third Topps card.
You can see in the inset that his mom was nice enough to label his helmet so it was easier to find when the veteran Angels hid it on him. 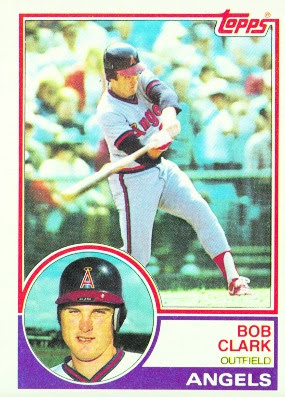 Player:  Bob Clark was pegged as a future star after hitting for power and average at AA El Paso and AAA Salt Lake.  Drafted by the Halos in the January draft four years earlier, he debuted in August of '79.  He got off to good start by batting 296/356/463 in 60 trips to the plate.  Clark showed showed decent defensive ability and was deployed at all three outfield spots.  He got a taste of the postseason but went 0-3 in ALCS action as the Angels lost to the Orioles.

Clark spent the first two months of the 1980 season tearing up AAA pitching at a .345 clip.  Called up in June, he started regularly in center and left, but was unimpressive. Clark hit .230 with only five home runs in 275 plate appearances.

The right handed Clark was on the Angels all year in '81 but was rarely used.  He hit .250 with four home runs in 88 at bats.  In 1982 he started only 19 games, 17 of them in CF against lefties giving Fred Lynn an occasional day off.  He got into 83 other games usually as a defensive sub for Brian Downing in LF or Reggie Jackson in RF.  Clark came to the plate only 93 times and hit .211.  Carrying his defensive role over to the playoffs, he appeared in two games but did not bat against the Brewers.

Perhaps wanting to see what he could do with regular playing time the Angels gave him a chance but Clark failed to deliver in '83.  He batted 231/261/354 in 225 plate appearances and spent part of the year in the minors.  At least he had one thing going for him as he hadn't made an error since 1980. 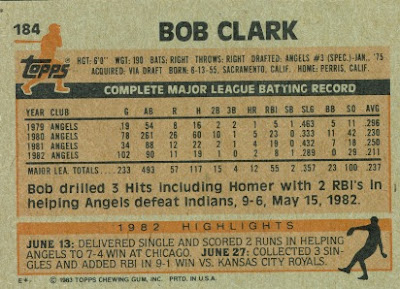 The Scouting Report: 1983 quotes Reggie Jackson as saying that Clark  "has one of the top five pure home run swings in the American League".
Uhh...ok.

History:  Clark hit 239/281/347 in seven major league seasons.  He had a niche as defensive replacement for a while but couldn't deliver offensively when he was given the opportunity to start.  He saw action in two postseasons however the Angels were knocked out of the ALCS both times.