Rick Miller looks like he is getting ready to lay a drag bunt down during a bright spring training game.  This is Miller's 11th Topps card.
We have back to back card of players with reddish colored mustache's who have brown hair.  The dad of a friend of mine had a similar hair / beard combo going on (probably still does), when I was a kid and I thought it was very unusual.  Even though it is not that rare, these cards made me think of Mr. Taylor. 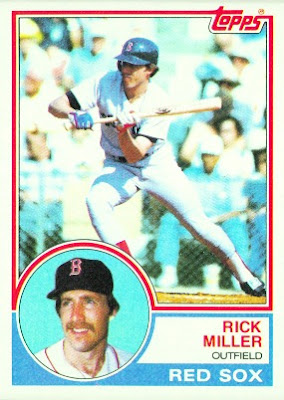 Player:  Rick Miller was a 2nd round pick of the Red Sox back in 1969.  The left-handed hitting and throwing outfielder debuted with Boston in September of '71.  Miller had 11 hits in 33 at bats with a home run and impressed manager Eddie Kasko with his defensive range.

He made the opening day roster in '72 but played only three games in April.  By July he was deployed often as a defensive replacement for Tommy Harper in centerfield. Miller played in 89 games but had only 98 at bats.  He hit three homers with a .214 average.  Miller played all over the outfield in '73 and due to injuries and ineffectiveness by his teammates he played in 143 games.  He hit 261/339/372 with six home runs, a total that would hold as a career high over his long career.

Miller platooned in '74 with similar results as '73 but with less at bats.  With the emergence of rookies Jim Rice and Fred Lynn, along with Dwight Evans' improved play there was little room for playing time in '75.  Miller hit .194 in 131 plate appearances and hat two hitless at bats in the World Series loss to the Reds.

With Lynn banged up, Miller received increased playing time in '76 and responded with a .283 average.  He returned to the bench in '77 and left for the California Angels as a free agent after the season.

Miller was used as the Angels starting CF the next three years, sitting out against lefties about 50% of the time.  He .263, .293, and .274 and won a Gold Glove in 1978.  He had four hits in 16 trips to the plate in the '79 ALCS loss to the Orioles.  Following the 1980 season he was traded with Mark Clear and Carney Lansford back to Boston for Rick Burleson and Butch Hobson. 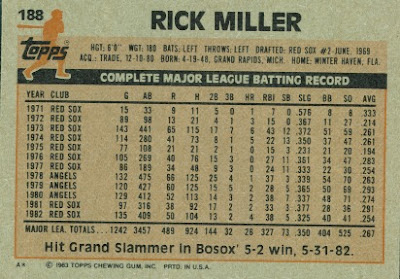 Flipside:  Miller never hit for power with just 28 career homers.  He did have a good eye with walks in over 10% of his plate appearances.

Oddball: Miller won his Gold Glove in 1978 as a California Angel despite starting just 120 games.  He had made a name for himself as a defensive specialist with the Red Sox earlier in the decade.  In '75 he played only 286 innings in the outfield yet recorded 1.0 dWAR according to baseballreference.com and 12 fielding runs according to fangraphs.com.  Strangely he recorded 0.0 dWAR in '78 which may indicate that all things considered that defensive stats need a larger sample size than one season to be relevant.

History:  Miller was a popular player during his days roaming the outfield pastures at Fenway Park with the late innings nicknamed "Miller Time" for the time he would enter as a defensive sub.  For his career he hit 269/346/350 with a 93 OPS+ in 15 seasons in the majors.

I realize the blog posts have become pretty sparse lately.  I have had a difficult time finding time for it with increased demands of coaching Little League (My 9 year-old son made the 9/10 tournament team, and I was picked to coach!), working 48+ hours a week, family life and this blog.  Please stick around, I'm not giving up on the blog nor losing interest.