Geez, Tim Lollar sure has a creepy gaze in the inset picture.  The action picture looks like it was taken at Shea Stadium.  If so, this was taken on 7/11/82 the only game Lollar pitched in New York in '82. 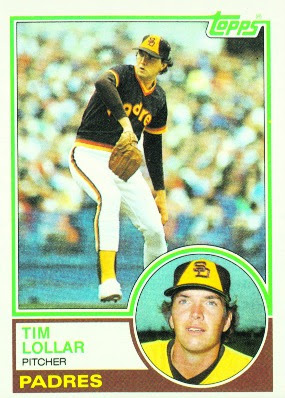 Player:  Tim Lollar was a 4th round pick of the Yankees in 1978.  The University of Arkansas product often DH'ed in the Razorback lineup when he wasn't pitching and the Yankees were unsure of his future position.  In his first two seasons in the minors, Lollar pitched in 30 games and batted in 63 others.  In 211 plate appearances he hit 7 HR and batted .237.  His pitching was better with a 3.72 ERA in 150 innings and the Yanks and Lollar eventually agreed to concentrate his efforts on the mound.

Lollar was used out of the bullpen in 1980 and was called up to New York in June.  He pitched mainly in long relief and had a 3.34 ERA in 32 innings with two saves.  On the verge of the '81 season he was dealt to San Diego in a six player deal.

The Padres used the young lefty as both a starter and reliever in '81.  Although better as a starter, he was hit hard in both roles and finished with a 2-8 record and 6.10 ERA in 76 frames.

Lollar started game Game 4 of the '84 NLCS but got a no decision after allowing three runs in 4.1 innings.  As Game 3 of the World Series approached Padres skipper Dick Williams considered letting Lollar bat for himself since their options at DH consisted of Kurt Bevacqua and Champ Summers.  At this point in his career, Lollar a .231 hitter with 8 HR would not have been terrible choice.  Bevacqua squashed that talk by going 3-4 with a big HR in Game 3.  In the end, it didn't matter much since Lollar gave up four runs in 1.2 innings and was hung with the loss.

After the season the Padres sent Lollar packing in a seven player swap to the White Sox.  He had trouble finding the plate and was dealt to Red Sox in July.  He pitched no better for Boston and finished the year with a 4.62 ERA and 98 walks in 150 innings.  He was used in a mop up role in '86 and often left a mess of his own.  In 43 innings he allowed 84 runners with 35 coming around to score.  Not surprisingly Boston didn't use him in the playoffs or World Series.

Lollar spent the '87 season in the minors for the Tigers and Cardinals but never returned to the big leagues. 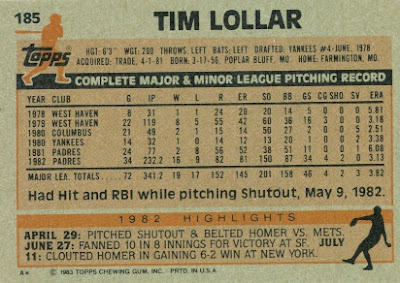 Flipside:  The '82 season on the back is easily Lollars best.  He recorded 3.1 WAR during his best season and only had one other year over 1.0.

Oddball:  Lollar pinch hit twice for the Red Sox.  He grounded out in his lone at bat in '85.  In '86 he was summoned to bat for Rey Quinones with two outs in the ninth inning against the Royals' Dan Quisenberry.  The Red Sox had a runner on first, and with the score 6-5, Lollar represented the go ahead run.  With a 2-0 count he drove one up the middle for a single, extending the game for arguably the best pure hitter of the era.  Wade Boggs however grounded out and the game was over.

History:  Lollar had one very good year but never matched the success of his '82 season.  Control was always a problem for the hard throwing lefty as we walked 4.8 batters per nine innings.  He played just seven years in the major leagues but was on two pennant winners.  Lollar retired with a 47-52 record and a 4.27 ERA (86 ERA+).
Lollar is now a golf pro in Colorado.
Posted by Brandon at 8:13 PM