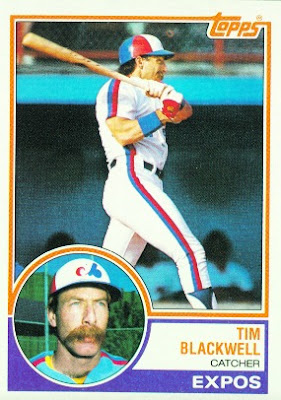 Card:  This is Tim Blackwell's fifth and final Topps card.
Pic: Blackwell is following through with a left-handed swing.  He must have been one of the players grandfathered in who didn't want to wear an ear flap on his batting helmet.  Blackwell's mustache....probably deserves it own fan club.
Player: Tim Blackwell was was a 13th round pick of the Red Sox in the 1970 draft.  The switch-hitting catcher was in the midst of his fifth season in the minors when he got the call to replace Carlton Fisk on the roster when Fisk injured his knee during the '74 season. In 122 at bats Blackwell hit only two extra base hits and batted .246.  With Fisk out until June of '75, Blackwell was on the team from the beginning of the season.  The Red Sox even kept him around once Fisk returned but Blackwell struggled all year at the plate and batted .197 in 132 at bats.
Blackwell started the '76 campaign at AAA Pawtucket, but was sold to the Phillies on April 19th.  The Phillies only used the strong-armed catcher twice over the next three weeks and sent him to double-A Reading before calling him up for a brief look in September.  Blackwell hit a combined .246 for his minor league teams and was two for eight in his few MLB at bats.  In 1977 he was back in Reading and rarely used before being traded to Montreal along with Wayne Twitchell for Barry Foote and Dan Warthen.  Blackwell stayed in the big leagues with the Expos through the end of the season but his .091 average in 22 at bats did nothing to impress his new team.
The Expos released Blackwell and he signed with the Cubs.  He started the '78 season at AAA Wichita and was called up in late July.  Although he found it hard to hit (.223 average), he had a decent eye and walked 23 times to give him a .367 OBP.  He spent all of 1979 with the Cubs but batted only .164,  walking 32 times in 159 plate appearances but getting only 20 hits.
Blackwell got a chance to play semi-regularly in '80 with 320 at bats.  He was more aggressive at the plate and had a career high .272 batting average and belted the first five home runs of his career.  He excelled behind the plate, throwing out 40.9% of base stealing attempts and received praise from the pitching staff for calling a good game.  Blackwell regressed in '81 batting .234 in 158 at bats and was released by the Cubs.
Blackwell returned to Montreal for the '82 season and batted .190 in only 23 games.  Blackwell didn't see much action at all with the Gary Carter playing almost every day. Blackwell was back for the '83 season but played only six times before receiving his release in July.  He was signed by the Angels and played out the year in AAA Edmonton.
Blackwell retired at the age of 31 and was a minor league catching instructor for one season and has been managing and coaching for various minor affiliates ever since.
﻿ 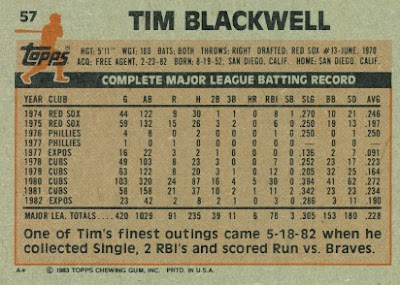 Flipside:  You can tell how poorly Blackwell hit in '82 when Topps uses one long sentence to tell us about one game.
Oddball:  Let's take another look at that 'stache! 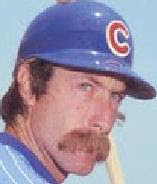 History:  Blackwell was a good defensive catcher but his offensive skills were better suited for double-A ball.  For his career he batted a meager .228 with a .305 slugging percentage.  It seems teams like having him around but really didn't like to play him very often.  Since retiring as an active player, Blackwell has coached and managed in the minor leagues for several different franchises.
﻿
Posted by Brandon at 10:20 PM