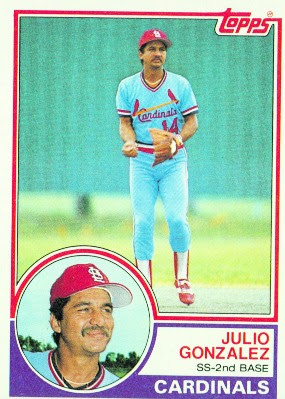 Card:  This is Gonzalez's fifth and final Topps card.
Pic:  Gonzalez either is pounding his fist preparing to get into the ready position, or he's doing the pee-pee dance.
Player:  Julio Gonzalez was originally signed by the Cubs in '72.  He toiled in the minors for five season before being traded to the Astros for Greg Gross.  Gonzalez was the Astros opening day starter at second base in '77 and played shortstop during the season as well, seeing action in 110 games.  Gonzalez batted a meager .245/.287/.316 and his defense wasn't much better with a .921 fielding percentage at short and sub-par range.
The 25 year-old Gonzalez was a backup middle-infielder the next two years batting 424 times but failing to register a >.300 on-base or slugging percentage either year.  His role was further reduced in 1980 as he played in 40 games and spent six weeks back in the minors.  Gonzalez batted a woeful .115 in 52 at bats.
Gonzalez was released by the Astros in spring training in 1981 but caught on with the Cardinals.  For a guy who batted .115 the year before, the Cardinals curiously used Gonzalez as a pinch hitter in about half of his 22 at bats.  He didn't play a whole lot and due to the strike shortened season he only played in 20 games.  Gonzalez batted .318 (7/22) and even added a home run.  He got into a little more action in '82, backing up Ken Oberkfell at third base and batting 87 times with a .241 average.  The Cardinals went on to win the World Series but Gonzalez did not see any postseason action.
Gonzalez was released  by St. Louis and picked up by the Detroit Tigers in spring training of 1983.  He started out the yeat at AAA Evansville and spent May and June backing up Alan Trammell and Lou Whitaker up the middle.  Gonzalez didn't see much action, getting three hits in 21 at bats.  The 30 year-old went back to the minors never to return to the big leagues.﻿ 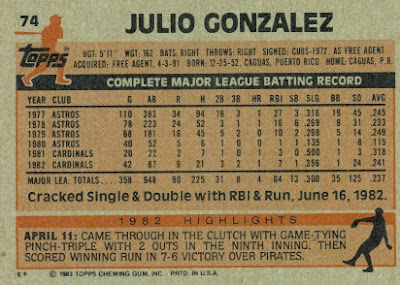 Flipside:  I can't believe Topps omitted this game. On 8/3/82 the last game of the season, Gonzalez entered the game as a defensive sub in the third inning.  The game went into extra innings and after 10 innings our subject already had a a double and two singles in three at bats.  After grounding out in the 12th, Gonzalez launched a home run in the top of the 14th to give the Cards the lead and an eventual win.
Oddball:  Julio Gonzalez seems like a very common Hispanic name but there has been only one other with the same name.  This Julio Gonzalez pitched in 13 games for the Senators in 1949.
History:  Gonzalez was a typical weak hitting career backup utility infielder.  His glove and range weren't really that great and with a limp bat he didn't really have much to offer.  He will most likely be remembered as a member of the championship Cardinals of 1982.﻿
Posted by Brandon at 6:29 PM