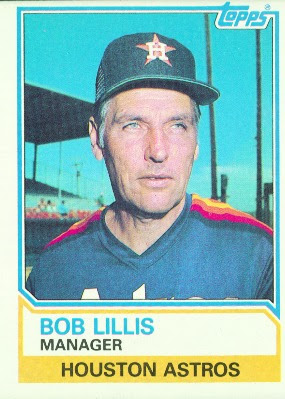 Player:  Bob Lillis was a light hitting shortstop who came up through the Dodgers organization,  He was blocked at that position by Pee Wee Reese and later Maury Wills.  He hit .391 in 69 at bats as a 28 year-old rookie in 1958 but he never could crack the Dodgers lineup .  He was traded to the Cardinals in '61 and later selected by the Colt 45's in the expansion draft.  Lillis was a regular for the new franchise but his aversion to getting on base made him a liability at the plate.  Defensively he was average at best.  Lillis played in 817 games and retired in 1967 with a woeful career line of .236/.270/.277.
Lillis worked as a scout and in player development for Houston from '68 to '72.  He then served on the Astros coaching staff from '73 until getting the manager gig in August of '82.
Manager:  On August 10, 1982 Lillis replaced Bill Virdon as the Astros skipper.  In his first start as manager Nolan Ryan threw a one-hit shutout against the Padres.  The Astros, 13 games under .500 when Lillis took over,  would finish the year winning 28 of their last 51 games and he was given a two year deal.
The Astros lost their first nine games in '83 but played well afterwards.  They finished the year in third place with a 85-77 record.  The Astros again started slowly in '84 winning only one of their first seven games and seven of twenty-one.  Again Lillis' Astros played better in the second half but finished in second place with a 80-82 record.  Houston started out okay in '85 but that is about all they were, just okay.
The third place Astros won 83 games and although he had a career record of 276-261, Lillis did not return as manager in '86.
Lillis joined former Dodger teammate Roger Craig's coaching staff in San Francisco and stayed there through the '96 season. 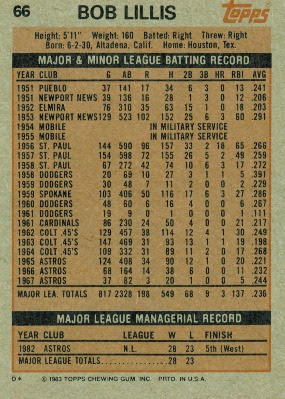 Flipside: Lillis hit 32 home runs in his pro career, 18 of them at AAA St.Paul in '56.  I guess he was making up for lost time from serving in the military the previous two years.
Oddball:  Lillis often sported a creepy, shadowy-wispy mustache.  He appears with this unflattering look in many of his pics, and unless you are a male under the age of 18 there really is no excuse.  Maybe he has sensitive skin I don't know...I get the impression that he when he did shave, he got to his upper lip and said "Aw, what the hell, I'll just leave it".
History:  Lillis was a decent manager but could never get the Astros over the hump from a good team to a great team.  The Astros under Lillis' replacement Hal Lanier won the division in '86.
Posted by Brandon at 5:31 PM