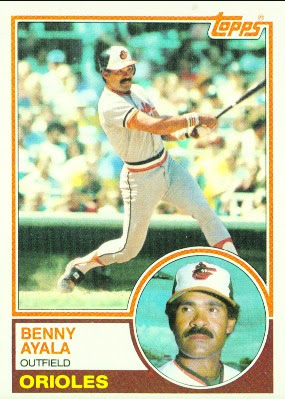 Card: Ayala appears on his fifth Topps card.  He was on a four player rookie card in the '75 set before disappearing from Topps cards until 1980.
Pic:  Ayala looks a little off balance after this swing.  He looks peeved in the inset, almost like he's looking at his action photo in disapproval.
Player:  Benny Ayala was signed by the Mets in 1971 as a free-agent out of Puerto Rico.  Ayala toiled in the minors for a few years and got called up late in the '74 season.  On August 27﻿ Ayala launched a home run in his first big league bat.  Ayala was given the chance  to play out the rest of the year as their left fielder but he hit only .235 with three extra base hits in 68 at bats.  He spent all of '75 at AAA Tidewater and played in only 65 games.  Ayala made the Mets opening day squad in '76 but after batting .115 he was sent down after 26 at bats and played out the string at AAA.
During spring training in '77 the Mets traded Ayala to the Cardinals for Doug Clarey.  The 26 year-old Ayala spent the year at AAA New Orleans and played well enough (.298 BA, 18 HR) to get a call up to the big club in September.  He appeared in only one game with one hit in three at bats.  Ayala spent all of '78 in AAA and batted .299.  Prior to the '79 season Ayala was traded by the Cardinals to Orioles for Mike Dimmel.
Ayala started '79 in AAA Rochester but a .335 average after 17 games earned him a promotion to the Orioles in May.  Ayala found his niche in Baltimore under manager Earl Weaver and was used as a pinch hitter and occasional platoon starter against lefties.  Ayala batted .256 but hit six home runs and five doubles to give him a .523 slugging percentage in 86 at bats.  Ayala made the post season roster but did not appear in the NLCS.  Although the O's lost to the Pirates, Ayala contributed in the World Series hitting a home run and a single in six at bats.
Ayala continued in the pinch hitter role for the Orioles and started against some lefties.  Weaver knew how to get the most out of his role players and Ayala was no exception hitting 10 home runs in limited use in 1980 and recording an OPS+ over 120 each year from '79 through the '82 season.  His production dropped off in '83 and he hit .221 as the Orioles won the AL East. He received only two post season at bats as the Orioles won the World Series over the Phillies. Ayala had a poor season in '84 batting .212 and was not re-signed.  Ayala hooked up with the Indians in April of '85.  Ayala was used as a pinch hitter and hit .250 in 76 at bats in his final season.  Ayala finished his career with 38 home runs in 865 at bats. 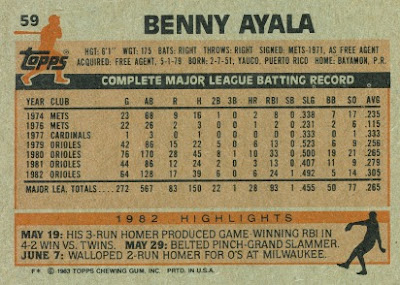 Flipside:  The May 29th game was a wild affair that the Orioles lost 11-10 to the Blue Jays.  Ayala's pinch grand slam in the seventh put the O's up 10-9, but the bullpen blew it, giving up runs in the 8th and 9th.
Ayala had just finished the last of his best years in '82. He was utilized masterfully in a rotation / platoon with John Lowenstein and Gary Roenicke.  From '79 through '82, Ayala batted .277 and hit 25 home runs in 470 at bats.
Oddball:  Ayala was used in such a strict platoon that he made only one start against a right handed pitcher in his days with Baltimore.  For his career he started 226 games, only 15 against righties.
History:  Ayala was an important bench player for the Orioles in their pennant winning '79 season and championship run in '83.  Ayala was not a good defender and was strictly a corner outfielder and DH but when used in the right spot came through with some big hits for the Orioles.
Ayala is currently a baseball coach in the Puerto Rican Instructional Baseball League.  ﻿
Posted by Brandon at 5:50 PM