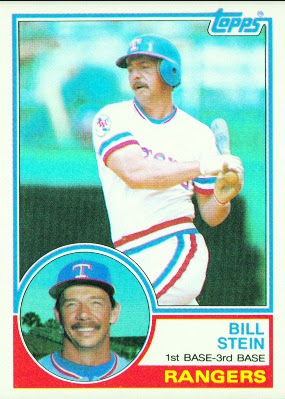 Card:  This is Steins's eighth card.  He played in the majors in parts of four seasons before showing up on a Topps card in 1976.  Stein is listed as 1st Base-3rd Base, but he only played five innings at first base all year. 2nd Base-3rd Base would have been accurate.
Pic: Stein doesn't look very comfortable.  Bill Stein's cards always bothered me.  I don't know why, but he always reminded me of a creepy janitor disguised in a baseball uniform.
Player: Bill Stein was a fourth round pick of the Cardinals in 1969 and never played below double-A level in the minors. The versatile infielder debuted with the Cards in September of '72 and hit two homers and batted .314 in 35 at bats. The 26 year-old Stein made the Cards in '73 as a pinch hitter, started only nine games, and batted only .218 before getting sent down in August.
Stein was traded twice before the start of the next season, first to the Angels and then to the White Sox.  Stein spent 1974 in AAA before receiving a call up at the end of the year, batting .279 in 43 at bats.  He made the big league team in '75 and after sitting the bench, he received some regular playing time at third and second base in June and July.  In 226 at bats he batted .270 with three homers.  Stein found his way into 117 games in '76 and batted .268 in 392 at bats.
Stein was selected by the expansion Seattle Mariners and was their everyday third baseman in '77.  He hit 13 home runs and batted .257.  Stein wasn't one to work the count and only walked 29 times in 600 plate appearances which contributed to a poor .299 OBP.  He was given another chance as a starter in '78 and hit .261 but missed a few weeks with an injury in August.  He was a reserve the next two years in Seattle and batted .248 and .268.
Stein signed as a free-agent with the Texas Rangers in '81 and had a very good year setting an American League record with seven consecutive pinch hits.  Stein batted .330 in 115 at bats while playing a utility role.  He continued in this role for over the next two years with a poor season in '82 (.239 BA) and a good one in '83 (.310).  Stein spent the last two years of his career as a rarely used pinch hitter with only 122 at bats over the '84 and '85 seasons and batted .279 and .253.
Stein retired with a career .267 average and played in parts of fourteen seasons.﻿ 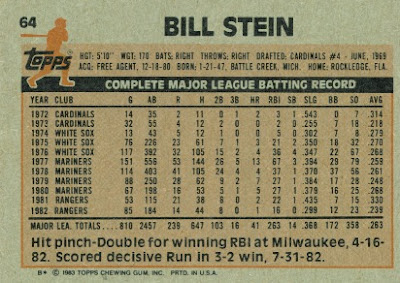 Flipside:  That decisive run Stein scored on 7-31??? It was in the first inning when the Rangers went up 3-0 on the Yankees.  Stein reached on a fielder's choice and came home along with Mickey Rivers on a Jim Sundberg double....in the first inning.  Yeah, great clucth running by Stein.
Oddball:  Stein once pitched in a minor league game after the starting pitcher was ejected for throwing a ball at an umpire.  Now that in itself is not unusual, but Stein pitched six innings! He gave up three runs on a Jeff Burroughs home run but also struck out six and didn't walk anyone.
History:  Stein was an average defender whose biggest asset was his versatility.  Except for a couple .300+ seasons his production as a hitter was sub-par and he didn't have good speed or power either.
Stein's biggest claim to fame is as an original Mariner and his pinch hitting record.
Since the end of his playing days, Stein managed in the Mets chain for a few years and in independent baseball as well.  Stein retired as a manager after the 1994 season.﻿
Posted by Brandon at 8:24 PM