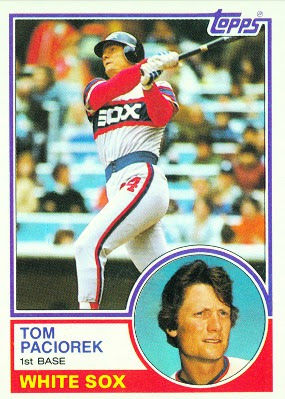 Card:  Paciorek's 10th Topps card and first with the White Sox.
Pic:  Lots of red, white, and blue.  Paciorek never looked very athletic to me....still doesn't.
Player:  Drafted in the 5th round in '68, Tom Paciorek﻿ made his MLB debut in 1970.  He spent most of the '70-'72 seasons dominating AAA ball waiting for a spot to open on the talent rich Dodgers.  Paciorek made the parent team in '73 as a backup outfielder and batted .262 in 210 at bats.  He remained a backup and received just 310 at bats over the next two years and batted .240 and .193.
Before the '76 season he was dealt to Atlanta in the Dusty Baker trade.  Playing left, right and first base Paciorek was able to show his abilities and batted .290 in 111 games.  He was a backup firstbaseman in '77 and batted only .239.  1978 was a strange but pivotal year for Paciorek.  Atlanta released him in spring training, resigned him a week later, sent him down to AAA Richmond where he sat on the bench for a game but returned when Gary Matthews was injured.  After playing in just five games, he was released again on May 23rd.  He hooked up with San Jose, the Mariners' top farm club.  He was called in late June and hit .299 in 251 at bats as the Mariners leftfielder.
Paciorek was useful for Seattle in '79 playing corner outfield and first, he batted .287 in a semi-regular role.  He played even more in '80 and responded with a career best 15 home runs in 126 games.  The lanky right hander broke through in '81 with his best year batting .326/.379/.509 and slugged 14 long balls.  He made the AL All-Stars and finished 10th in MVP voting.
The Mariners traded him while his stock was high sending him to Texas for Rod Allen, Todd Cruz and Jim Essian.  Paciorek remained productive for the Pale Hose batting .312 and .307 in a semi-regular role.  His production slipped in '84 as he batted only .256.
Paciorek was traded in the middle of the '85 season to the Mets for Dave Cochrane.  He batted .285 for the Mets and finished the year batting a combined .265.  After the season Paciorek signed with the Rangers and batted .286 and .283 in his last two seasons.
After his playing career Paciorek did broadcast work for the White Sox ('88-'99), Tigers ('00), Braves ('01-05) and Nationals ('06). 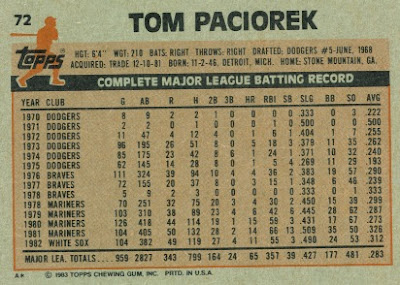 Flipside:  For being 6'4" Paciorek didn't many home runs.  He averaged only one home run per 48 at bats.
Oddball:  Despite the previous comment Paciorek was nicknamed "Wimpy" by Tommy Lasorda who was his manager in the minor leagues.  Lasorda named him after the Popeye character.
History:  Paciorek took a while to produce in the big leagues but was productive in the early 80's.
He drew some criticism as an announcer for being too much of a homer, but he he always seemed to have good insight into the game.﻿
Posted by Brandon at 7:44 PM