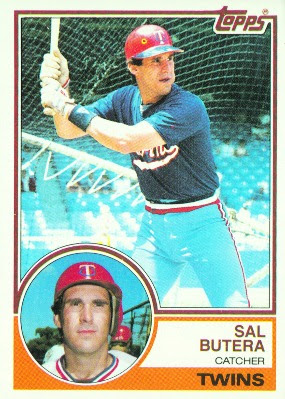 Card:  This is Butera's third Topps card. Butera would have to wait until 1987 to grace another Topps card.
Pic:  Looks like Butera is getting some batting practice at Tiger Stadium.  Which is appropriate since Butera's only MLB action in '83 would be for Detroit after a spring training trade.
Player:  Sal Butera paid his dues in the minors from 1972-79 before making the Twins roster in 1980.  Butera, who made the majors despite going undrafted, served as the Twins backup catcher behind Butch Wynegar.  Butera didn't play much his rookie year and although he batted .270 in 85 at bats, he walked only three times with only one extra base hit.  The Twins valued him for his defense and when Wynegar was injured in '81 Butera stepped in for a while and threw out 54% of stolen base attempts.  He batted .240 in a what would prove to be a career high 167 at bats.  In 1982 Butera hit .254 in 126 at bats as rookie Tim Laudner received most of the playing time.
Butera was dealt to the Tigers before the '83 season but spent all but four games at AAA.  He signed with the Expos in '84 and got into only three big league games.  Butera started '85 in the minors but was called up and ended playing in a career high 67 games.  He hit only .200 but did manage to hit the first three home runs of his career.  In December he was traded with  Bill Gullickson to the Reds for Dann Bilardello, Andy McGaffigan, John Stuper and Jay Tibbs.
Butera was the Reds backup catcher in '86 batting .239 in 113 at bats.  He was released in May of '87 and promptly picked up by Minnesota.  He batted only .171 but he was around as the Twins won the AL West.  Butera had two hits in game three of the ALCS, the only game the Twins would lose to the Tigers.  The Twins wound up winning it all and the 35 year-old veteran now had a World Series ring.  The Twins released him the next spring and he played sparingly for the Blue Jays in '88 batting .233.   After a year at AAA Syracuse in '89 he retired and like many catchers, moved into coaching.
Butera managed for a few years in the Astros and Twins organizations and was the Blue Jays bullpen coach in '98. He is currently a Special Assistant to Toronto GM Alex Anthropoulos﻿. 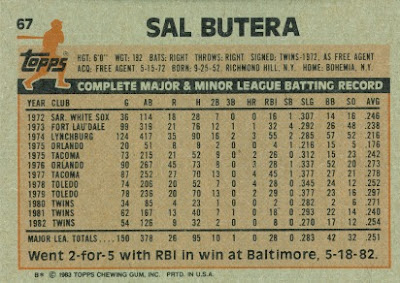 Flipside:  Not sure how it worked, but Butera was signed by the Twins in '72 but his first two years were played with White Sox and Yankee affiliates.  Maybe he was on loan?
Oddball:  Butera played in only 359 games in his career but pitched twice.  On both occasions he pitched a scoreless inning to finish the game, first for the Expos in '85 and again for the Reds in '86.
History:  Butera likely will be remembered as a bench player for the championship '87 Twins.  His best asset was his strong throwing arm and a career batting line of .227/.302/.295 explains why he never was able to land a starting job.
Sal's son Drew Butera has a similar skill set, and like his dad is a backup receiver for the Twins. ﻿
Posted by Brandon at 5:46 PM