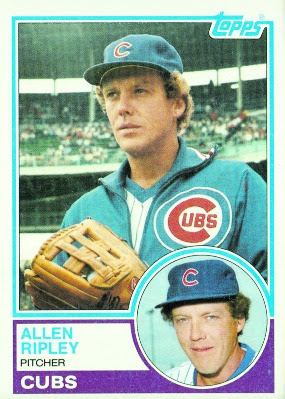 Card: This is Ripley's fifth and final card.  In fact, by the time we got our hands on this card his MLB career was over.
Pic: No action shot here.  Just a standard "Hey look off to the side a minute so I can get your picture quick, ok, got it, thanks". At least Wrigley field is in the background.
Player:  Allen Ripley was signed by the Red Sox in 1973 as an undrafted free-agent and played five seasons in the minors.  He started '78 as Boston's number four starter and made eleven starts and four relief appearances in which he sported a 5.55 ERA.  He was sent back to Pawtucket in July for the rest of the year.  In '79 Ripley was used as a relief pitcher at Pawtucket and was recalled in July.  He pitched in 16 games with three spot starts pitching in 64 innings with a 5.15 ERA.
The soft-tossing righty was sold to the Giants before the start of the 1980 campaign. After seven starts at AAA Phoenix, he was inserted into the Giants rotation and made 20 starts and pitched 113 innings.  Ripley finished 9-10 with a 4.14 ERA.  He started '81 as the Giants #5 starter and made a few cameos out of the pen.  Ripley had a 4-4 record and a career low 4.05 ERA.
In December of 1981 Ripley was sent to the Cubs in exchange for Doug Capilla.  Ripley started the year in the rotation and was in and out throughout the 1982 season. He made 19 starts and won five against seven losses with a 4.26 ERA.
Stuff: Slow and slower.
﻿ 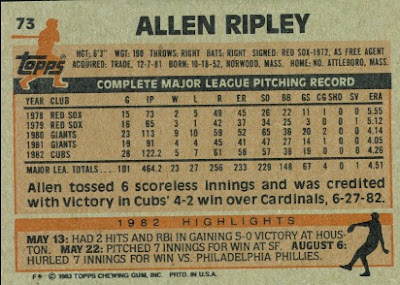 ﻿
Flipside: Ripley made 19 starts in '82 but did not pitch more than seven innings in any of them.

Oddball:  RIpley lacked velocity...badly.  Bob Brenly referred to Ripley as "Speed Limit" because "He never threw anything over 55 mph".  Now that might be a stretch but you get the idea.  Ripley's fastball was also known as an ecological fastball because of its lack of gas.

History:  Ripley had a brief five year career and never had an ERA+ over 88.  His lack of velocity left him little margin for error and he was unable to have a prolonged career.
He didn't leave much of a trail.  I couldn't find anything about him after  he retired in1982.  His father Walt pitched for the Red Sox briefly in 1935.
Ripley's biggest claim to fame may be that  he was Dennis Eckersley's drinking buddy in Boston
Posted by Brandon at 5:40 PM